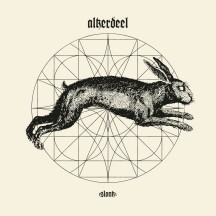 
We waited as if it was a tortoise, but this hare surely won the race.

It's hard to believe that it has been almost a decade since I discovered Alkerdeel through the magnificent Morinde, or that 5 years have already passed since their previous album, Lede. I rest assured that the Belgian maniacs have returned with yet another piece of gritty, filthy sludge/black metal.

It's quite hilarious that the album starts with an ambient, cosmic synth intro. It soothes the listener into believing the band has taken a path of beautiful, calmer landscapes. Two minutes in and the illusion disappears, punching you in the face with an imposing wall of distorted riffs. Otherworldly aspects can be heard in the impressive bass work that has always been a template of Alkerdeel's sound. It takes its sweet spot, almost soloing, throughout the whole album with bass licks that lull you into a trance as the band slow down the tempo. However, this sense of hypnotic groove meets its match through fast and unforgiving riffing. The black metal sections get so much in your face with their punkish attitude as they pick up the pace in a rabid frenzy. Every time I hear singer Pede lashing out in a violent "UH!" I lose my cool, making me want to destroy my apartment and kick Covid in the nuts.

My feelings towards this fucking virus get further fueled when I notice the amazing live sound of this album, yet another of Alkerdeel's distinct assets. Slonk pummels through like a concert of infernal proportions as the songs flow seamlessly into the next. The organic feeling of this record is mostly noticeable in the drum work that remains quite clear amidst the storm of blurry, disorienting riffs. The cymbals assault the ears and the bass drum hits you in the chest like a hammer. Sometimes, like with a real concert, the unrelenting nature of this album can take a toll on you. The opener "Vier" capitalizes on more hypnotic passages but the rest of the album goes the opposite way with desperate black metal chaos. However, what Slonk loses with respect to the drawn-out atmospheric jams of the first two albums, it gains in absolute airtight sonic madness. Alkerdeel have developed a furious, unpredictable, and highly volatile sound that appears to be on the verge of collapsing under its own weight at any second... But they surely are one of the few bands capable of harnessing it.