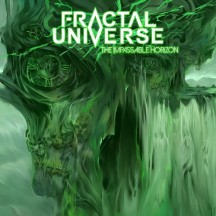 
If you thought for a moment that technical death required German precision, or American directness, or Canadian brutality, well, you would be right. However, the creativity of French people is not to be underestimated. Halfway between progressive metal and technical death, the combo from France known as Fractal Universe have shown huge promise with their previous effort Rizhomes Of Insanity, which landed them a working collaboration with Gojira and a European tour with non-other than Obscura before the pandemic hit. Excuse the references.

With Fractal Universe, be prepared to expect the unexpected. Also be prepared for a lot of mathematics and astronomical references in those lyrics. After all, fractals are images of dynamic systems driven by recursion that design unfinished patterns, also referred to pictures of chaos, which are strangely hypnotic and well, better organized than the mess that are supermarket shelving practices or auto insurance discount deals.

The music is technical death smashed together with traditional progressive metal and a hit of everything in between, including a little jazz, saxophone and all, groovy rhythms on select songs, and overall a complexity that leaves listeners a little perplexed on first listen. "Wait, this sounded like Threshold but a minute ago it was pure technical death and now it sounds like Gojira?". Yeah, it is a lot to ingest in one sitting but that is what extreme progressive metal is all about.

The Impassable Horizon is a couple of minutes shy of the hour mark, but it feels like three hours long due to its complex and saturated nature. Midway through the album, it sounds like you have entered an alternate dimension where a second album somehow sprouted out of the first one and reaching the end of the listening journey is but a fleeting illusion. That does not make it bad, not at all, but a tad mentally overwhelming.

Our universe might as a matter of fact be fractal, which would explain a lot. As for Fractal Universe, The Impassable Horizon is a set of infinitely complex patterns that are self-similar across different scales, and coincidentally a rather groovy progressive album of extreme metal in this planar version of the universe. It is truly enjoyable but requires massive effort to process, and the sheer amount of influences, rhythmic breaks, complex melodies, and added flavors might turn it into an exhausting experience at first. This is an album for patient listeners who enjoy complex, progressive, technical, and unpredictable metal. One day, you too will pass through this sonic event horizon from France.

Written on 17.08.2021 by
Dream Taster
Bringing you reviews of quality music and interesting questions such as: