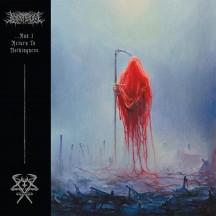 
Deathcore and a Lewandowski cover. Where have I seen that before?

It should be pretty telling that currently the only comments on the album's page are about the cover art. Particularly about how people are tired of seeing Lewandowski's cover arts everywhere and how they're starting to look all the same. Isn't that pretty much what happens to all genres and artists? Stuff gets saturated after a while. If this was the first Lewandowski cover art I'd see I'd love it. If ...And I Return To Nothingness was the first deathcore release I listened to I'd love it. Alas, after thousands of black metal, dream pop, post-rock, IDM or hip-hop album you listen to, it's hard for a newer one to have the same kind of impact, unless you're specifically looking for the exact same thing. Could you imagine what would happen if Lewandowski just completely branched off?

Enough talk about Lewandowski and the over saturation of art. The cover art is good, and so is the album, regardless of how much similar stuff already is out there. The journey to this point was pretty mangled for Lorna Shore. There's been numerous line-up changes and varying decrees of success for the releases up to 2020's Immortal. But that one suffered the most, from members being outed as shitty people and booted, to numerous delays and a pandemic ravaging any further touring. 2021 now sees Lorna Shore replacing its booted members, and returning to nothingness with some of the heaviest deathcore out there. Now I know that this is just a 3 song EP and that a whole bunch of bands like to have their fancies tickled about being the heaviest out there. But I think it works to this EPs advantage.

First, the new vocalist, Will Ramos, fits like a glove and is instrumental to just how bludgeoning this sounds. He's obviously not the only one who seems to help revive the band, new guitarist Andrew O'Connor also deserves a shout-out, but the vocals are the most obvious revitalization tool in the box, and their impact is immediate and eviscerating. That aside, ...And I Return To Nothingness has Lorna Shore distilling what has worked for the genre as a whole and for the band in particular, namely deathcore with some blackened and symphonic undertones, some more overt than others. So taking everything from deathcore's appeal, from the heaviest of breakdowns, the gnarliest of squeals, the most oppressive of atmospheres, it's all distilled into a small 18 minute package, where there is no chance of overextension or listener fatigue.

I can't say I have much doubts that if Lorna Shore keeps this current formula they'll be able to top Immortal. What else is left to do in deathcore? Hooded figures and nasty breakdowns.