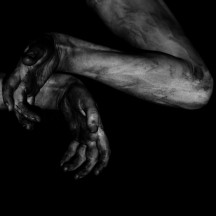 
This was not what I expected from a Fawn Limbs album, but that is by no means a bad thing.

Across their first two albums and other releases, Fawn Limbs have rapidly established themselves as a particularly abrasive juggernaut of noise. Their sound on these first two records was most easily categorized as mathgrind, combining the frenetic chaos of mathcore with the ballistic aggression of grindcore to make something arguably even more punishing than either of those genres. That punishment extended further than what I am able to fully enjoy in metal, so, on seeing they were going to follow up the already swiftly released Sleeper Vessels with a similarly swift album number 3, I was expected to give it a brief blast and then quickly move onto something less unrelentingly intense.

However, there were a couple of clues before I pressed play that made me curious about what laid in store. First, despite featuring only half the number of tracks than Sleeper Vessels, Darwin Falls is five minutes longer. Second, amongst the instruments played by guest musicians credited on this album were trombone, trumpet, oboe, viola and other members of the orchestra. What exactly did Fawn Limbs have up their sleeve? Well, the fact that, on more than one occasion, I've briefly thought I was listening to SubRosa before checking the song should be an indicator of the surprises to be found on Darwin Falls.

There's still a sizeable amount of oppressive aggression to be found here, such as the explosive assault of blasts halfway through opener "Nesting Lumens", but around that, you have to navigate plenty of eerie strings, which alongside the other orchestral strings give off a rather sinister vibe even in the absence of any growls or blasting. There's several sections of both this song and the album as a whole that are dedicated to the string-dominated 'clean' instrumental sections and the spoken word that frequently accompanies it; however, there's also times when the metallic form of Fawn Limbs is accentuated by strings, typically in the slower, doomier moments.

The songs here are also more expansive than those on past records, with 5 out of 7 songs on Darwin Falls running longer than any of the 13 tracks on Sleeper Vessels. The large bulk of this length is due to time allocated to the non-core music on the record; on songs such as "Nesting Lumens" and "Wound Hiss", each of which break the 6-minute mark, there's probably only enough mathgrind to fill a regular-length song from the previous album. When you factor in the instrumental-only quasi-interlude "Caesura" and the predominantly soft closer "Dissolver", you're looking at only less than half the music on Darwin Falls fitting the musical template established on Sleeper Vessels. Once you get to these heavy moments, that mathgrind sound seems to be prioritizing the grindcore over the mathcore, with less contorted time signatures and more all-out assaults, and there's also quite a few instances where things are slowed right down and Fawn Limbs descend into suffocating grinding crawls.

Overall, Darwin Falls is a pretty drastic departure from Sleeper Vessels; however, I think that's something that really works in its favour. Although those that listened to Fawn Limbs purely for the relentless aggression will possibly be disappointed by this shift, I find the eerie quasi-ambient orchestral instrument arrangements to bring a really creepy, bleak atmosphere to Darwin Falls. Also, the reduced presence of the grindcore and metal sections means that when they do arrive, they hit harder, particularly some of the dirgier segments. There's a level of maturation to their evolving sound that is comparable to the development Wake have undertaken in recent years, even if the exact manner of the shift differs from Wake's death-oriented progression. Also, it's nice to see a band trying to reframe the tonally weird, creepily atmospheric string use of the likes of SubRosa and Soldat Hans in a more extreme setting.

An unexpected album, Darwin Falls trades in the unrelenting frenzy of Fawn Limbs's first albums for a more expansive, atmospheric and eerie approach. By adding this range to their sound, Fawn Limbs manage to stop their rapid release schedule from allowing their mathgrind style on early albums to grow stale.

Written on 28.08.2021 by
musclassia
Hey chief let's talk why not
More reviews by musclassia ››