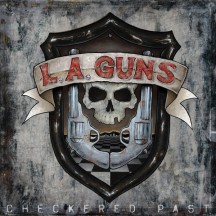 Like cockroaches surviving a nuclear bomb, L.A. Guns have clung to life where many of their glam brethren either broke up or re-emerged years later as heritage acts living off former glories. While glam metal was unceremoniously curbstomped by the arrival of grunge in the 90’s, L.A. Guns put their heads down, stuck to their *ahem* guns and kept moving forward, and have been prolific in the intervening years. 2021’s Checkered Past sees the Tracii Guns and Phil Lewis incarnation of the band release a good if unambitious album of bluesy rock that will largely pass you by. Checkered Past is an enjoyable though largely unmemorable collection of tracks that only really stick out more for what the band do wrong than right, with the album playing out with in a fairly flat fashion with only a few peaks (and more valleys) to add character to proceedings.

L.A. Guns can be counted on for producing a record that is full of entertaining guitar work, taking things back to basics and amassing a collection of riffs and solos that are fun to listen to and give the songs their character. While “Cannonball” and “Better Than You” lean on the metal part of glam, “That Ain’t Why” and “Bad Luck Charm” highlight the genre’s blues roots (though not to the extent Cinderella made famous). Guns and Von Johnson may not craft the next “Enter Sandman” or “Layla”, but they at least make for a fun listen, which is something that can often be found lacking in latter-day glam metal records.

The band’s performance otherwise matches the production and can be labelled average with little hesitation, with Lewis rarely getting out of first gear behind the microphone, only really standing out when he channels Liam Gallagher on “Better Than You”, and Hamilton’s drums being professional but passionless. The production is crisp and clear but lacks much in the way of punch or power to make the listener pay attention beyond a casual listen, which combined with the music makes it hard for you to really engage with songs like “Knock Me Down”.

The main drawbacks to Checkered Past are somewhat ironically what was the problem with many a glam record, that being formulaic and bland power ballads. “If It's Over Now” and “Let You Down” remind you of one of the worst elements of the glam genre and are something you hoped the band would have left in the 80’s when that formula worked. “Get Along” skirts close to the same cliff edge, but manages to pull itself back so that it teeters on the edge of being a bad track, while “Dog” makes you want to drop kick an otherwise ok song over the edge when Lewis woofs.

Checkered Past can unfortunately also be applied to the present, with L.A. Guns producing a record that won’t do much to move the needle, but is admirable in its attempt. Worth a listen if you are a fan of the genre or just want some fun guitar-driven rock in the background, but skippable for anyone who only has a passing interest in the genre.

Written on 19.11.2021 by
omne metallum
Just because I don't care doesn't mean I'm not listening.
More reviews by omne metallum ››