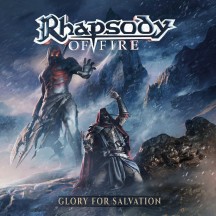 
Just to clear things up before we start, this is Rhapsody Of Fire, the one that still has Alex Staropoli. Not any of the other six. Recently, some of those offshoots have shone more brightly than the progenitor star, but Staropoli's latest lineup is clawing its way back up the ramparts to the glory that once was.

The way I see it, Rhapsody Of Theseus is on the up. We’re not talking Symphony Of Enchanted Lands or Dawn Of Victory, but we are talking The Frozen Tears Of Angels or From Chaos To Eternity, which were the last triumphs of the original Rhapsody lineup prior to its agreed-upon splintering. Since the nadir of a few years back, Rhapsody Of Fire has been inching towards those inaugural pillars; I'm not sure whether I would call Glory For Salvation better than The Eighth Mountain, but they're rather close, and both are certainly leagues ahead of Dark Wings Of Steel, Into The Legend, and the unnecessary deviation that was Legendary Years.

Some of the biggest complaints leveled against Rhapsody Of Fire in the last decade include a general lack of inventive guitar work in the wake of Luca Turilli's departure and apparent attempts to rehash a generic "Rhapsody sound." I find these criticisms generally justified, even if Glory For Salvation is beginning to move the band away from "post-split" to "new tomorrow." Roberto de Micheli;s position is unenviable as a talent filling in for a genius, and though his work on "The Kingdom Of Ice" and "Maid Of The Secret Sand" hints at the type of confidence and intricacy that fans demand of Rhapsody Of Fire - the absence of which caused those first couple of albums to plummet in esteem - I still hear a big gulf between what's happening now and what the band could be doing with the skills at its disposal. As for the songwriting, while I hesitate to say that there has been a marked improvement - perhaps not enough to lasso lapsed fans still longing for the days of the dragonflame - the production seems to be heading in the right direction, and the invigorating clarity of songs like "Terial The Hawk" and "Abyss Of Pain II" is enough to make Glory For Salvation very listenable, if not as sublime as the days of old. Staropoli's iteration has faltered, but he is still casting about for fresh ideas in that experimental manner characteristic of Rhapsody and its inflammable successor.

One way you can still identify the true spark of Rhapsody Of Fire is the depth of the arrangements; Staropoli finds himself responsible for a much greater share of the composing than in the band's heyday, but he has not forsaken the role when it comes to those vast choirs and orchestrations. The melodies are still wanting compared to classic material, but I love hearing those choirs, and it seems as though the songs are often led by vocals, with guitars and keys usually relegated to support roles; this is a sensible choice while the band's instrumentalists continue to tinker away at finding their own sounds, especially given how energetic and charismatic a frontman Giacomo Voli is. The drums are on the loud side, which I feel comfortable in attributing to mixing engineer Sebastian Levermann; Levermann likes to use a free hand with the rhythm section in Orden Ogan, and I can hear his preferred wall of sound coming through quite strongly. It's a bit of a different feeling for Rhapsody Of Fire's production, but this is Levermann's third time working with them on a studio album, so they must enjoy it - and with the vocals leading the charge to a greater exclusion of the instrumentalists than I am used to, I think it works. The choruses are big, the choirs are bright and layered, and Voli's vocals are dazzling.

A lot of power metal bands have taken the stage since Rhapsody made its legendary debut, and it would seem that the best years of this project remain behind us, but it's still true that no one is really doing the exact same thing, at least not as well. Even if Glory For Salvation isn't as glorious as those golden years, its vigor and brightness make me confident that at the very least we won't again face something as dull as Dark Wings Of Steel - and we may get another masterwork yet.