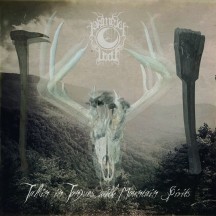 
01. Psilocybin Psychosis By The Mountain Top Cross
02. Raising Up Antlers To Our Mountain Gods
03. She Flies Undead
04. Ghost Fires Burn In Our Eyes
05. Talkin' In Tongues With Mountain Spirits
06. Tales Carved In Stone On A Forbidden Road
07. Where All Things Are Forgotten
08. Sickening Laughter With The Grinning Trees


First, place a cauldron filled with five litres of water over a fire until the frogs boil. Next, add the psilocybin, darkness extract, and zombie kittens. Finally, get Steve over there to stir it with a muddy stick or otherwise stick-shaped object. Don’t forget to bring a banjo!

Come ye all an’ have a “Psilocybin Psychosis By The Mountain Top Cross” while the kids discount lasts! Uh oh, someone already drained our witches’ brew to the dregs, an’ now somebody is screamin’. Wait, was that me, or are you me? What’s that screeching noise, anyway? Oh, still me, screamin’. You guys brought the amps an’ drum kit? Guys? Guys…? Ah, I didn’t quite see y’all there behind the kaleidoscopic warble falls. Can see both Monday an’ Sunday at this time of the week, and… yup, definitely shrooms in the ‘shine this fine midnight afternoon. Now, we’re pluggin’ in that banjo, “Raising Up Antlers To The Mountain Gods” (you’re still just holding a muddy stick, Steve), and makin’ some “experimental Southern gothic black metal”. That’s a pretty nifty, home crafted genre tag. Obviously exceedin’ the Netzach Three-Word Rule™, though, so let’s drop the “experimental” and the “gothic” for now. They’ll come back when the spirits get hungry for spirits, anyway. Come to think of it, there’s not a lot of “gothic” on display here. I’d assume “Southern gothic” refers to aesthetics similar to True Detective, blendin’ cosmic horror, psychedelia, an’ occult themes into a nice, murky potion.

Yes, that’s the banjo, Steve, now play it subtly on this first proper song. Bend those strings behind a wall of too loud guitars an’ too low percussion, so that it sounds like decently raw black metal with just a hint of wacky semitones. Comply, Steve, or we’ll scare away anyone not from Tennessee right at the start. Actually, probably even anyone from outside our mushroom farm cellar in downtown Nashville, which leaves… well, Primeval Well. Don’t be sad, Steve, have some more wolverine tea, we’ll soon enough introduce these folks to… what was it again, blackgrass? It’s an apt tag. Followin’ the slightly lacklustre opening duo, “She Flies Undead” unashamedly embraces a part of American folk rock I’ve always had a soft spot for: bluegrass. It’s a weirdly disjointed song, that starts out with clean country vocals (I don’t know, ask a real American) over a twangy banjo hook. Soon, it is interrupted by a wall of blast beats supporting a slightly dissonant, distorted banjo (or steel guitar, or… yes, Steve, more tea…) lick. Primeval Well then proceed to repeat this pattern for roughly half of the song length, eventually smashin’ the two together into a psychedelic doom section. It grows more chaotic an’ noisy as the instruments all start blendin’ together into a sort of textural disharmony that slowly tapers out… an’ then… I tend to replay this shouldn’t-work-but-c’mon-it’s-rad absolute fuckin’ jam once more before movin’ on!

Talkin’ In Tongues With Mountain Spirits is showin’ signs of a lack of cohesive focus already by this point. I assume this is what comprises the “experimental” in their genre tag. If not bein’ too picky about the album as a whole, though, there’s only a slight chance of its very varied collection of songs becomin’ borin’ anytime soon (unlike those apostrophes, eh?). From start to finish, it can be a tough listen due to bein’ all over the place. In a nutshell, using Kentucky’s Panopticon as the obvious frame of reference, Primeval Well’s take on country black metal is quite different. Weaving Southern an’ Appalachian folk influences into a raw, unhinged “progabilly” tapestry, they’re largely espousing the atmospheric an' post-rock passages associated with aforementioned other banjo black pack.

Some tracks work better than others (ain’t that usually the case, Steve? Steve…? STEVE?!), my favourites bein’ the more folky cuts. “She Flies Undead”, the title track’s (a)cutely mind-bendin’ banjo bendin’ an’ pickin’, an’ the dynamic “Where All Things Are Forgotten”, (which sounds something like a Native American chantin’ his way to a severe case of HPPD) are highly replayable songs, while the rawer black metal tracks tend to lag a little due partly to a not-stellar production, and an overall sense of similarity in the way the banjo is used to break through the walls of sound. I can definitely see how some of y’all would be of the opposing opinion, however; preferrin’ the speedy, slightly wacky black metal cuts over the eclectic, highly wacky folk/prog cuts. You might even enjoy all of it, but for me an’ Steve, Talkin’ In Tongues With Mountain Spirits works a lot better in parts than as a whole.

Disclaimer: The Netzach Three-Word Rule™ is not an actual rule, but c'mon, fewer words, more music.
Disclaimer: Blackgrass is as yet not an officially recognised subgenre, and neither is progabilly.
Disclaimer: I never want to see an apostrophe again.
Disclaimer: Wolverines do not exist in Tennessee. They've got tea, though. Not made from wolverines, mind you.
Disclaimer: It’s past midnight, so I take no responsibility for Steve during the next four hours. Mind taking the next shift, Steve?