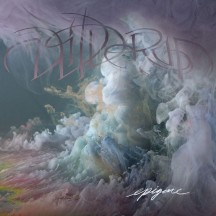 I should probably avoid jumping to conclusions from only one data point. Should, would, could… Where's the fun in that, though? Judging by the definitely insubstantial empirical evidence available to me at the moment, 2022 will be an amazing year for metal. Should Epigone turn out to be a statistical outlier, Wilderun certainly starts the new year with a big bang, if nothing else. Come for the review, stay for the hype; this is all the fireworks I need this New Year's Eve.

It's not immediately apparent, seeing as how Epigone certainly takes its sweet time unveiling its genius. In fact, I'm positive Wilderun like to tease their listeners to no end. It opens with four minutes of acoustic strumming and mellow singer-songwritering that ends in a noisy crescendo that turns out to be one hell of a red herring, as the first half of the fifteen-minute "Woolgatherer" brings more of the same. Yeah, it's that sort of album. The sort that demands your full attention while trying your patience. The sort that expects a scented candlelight ritual while played on vinyl (sorry guys, I have to make do with an unwieldy promo stream), and spends much of its time mostly hinting at the excellency buried within. You know what? It seriously works. It shouldn't, but it really does. There are so many amazing little moments sprinkled throughout Wilderun’s progressive, cinematic storytelling that they manage to keep even my admittedly lacklustre attention span along for the entire ride, and I'm still coming back for more.

At risk of permanent disgrace (nothing to lose there, actually), I'll say Epigone is what I always wished Opeth were. Yeah, I'm a Swede, and I never liked Opeth. They're super boring. Write a big headline about it, won't you? Nah, don't. Instead, write a big headline about the sheer pleasure of hearing the band finally bring out the death growls and blast beats halfway through the second track, and about the infuriating way they seem admirably content with just putting it out there before returning to mellow, acoustic noodling for several more minutes. Write a big one about the absolutely massive chugging riff in "Passenger", that's over as soon as it enters, never to return. Or write about how the incredible highlight "Ambition" jumps between sections of prog death bliss, seriously hard-rocking riffs, and vivid soundscapes that amount to the closest aural approximation of open eye visuals I've heard since, uh, next year. Why am I telling you what to write about; I'm already writing it? Well, because you're going to spread the word and make sure any fan of progressive and symphonic music does themselves the service of giving Epigone that full attention it demands and deserves. I haven't even followed along with the lyrics; I really don't need to. The vivid images Wilderun paint with their expansive, ambitious music speak for themselves.

There are tiny hiccups, of course. The way most of the clean, subdued sections never really stick to my memory bugs me, but only until the next jaw-dropping moment of prog metal mayhem. The synth interlude does nothing for the album, and feels very out of place. The album ends as discreetly as it opens, without the big fanfare expected. It takes balls to play this sort of music. It takes confidence to demand your listeners' attention. Furthermore, it takes a mercurial personality to subvert expectations over and over, but Wilderun have got balls, confidence, and mercuriality in spades, and they aren't even afraid to be annoyingly low-key about it.

Epigone makes me forget, and re-remember, that good things may indeed come to those who wait, and can be made even better partly thanks to the wait. Epigone does it over and over, even several times within a single song. It's not a perfect album, but its shortcomings are negligible, and it's a masterpiece for sure.