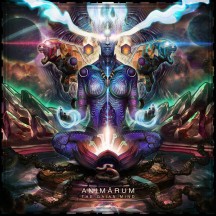 Okay, maybe 2 occurrences isn’t quite ‘in vogue’, but it’s still an unusual coincidence that it occurred twice on the same day, given the relative infrequency of this. In addition to Mathan’s excellent death metal debut, Darkroot Tzantza, this day also saw the first offering from the New Jersey outfit Animårum. Now, I’m not quite sure whether this is intended to be an EP or a full-length debut, as I’ve seen it referred to as both in different places and its length (30 minutes) is in the sweet spot to be counted as either. Whatever it is, The Gaian Mind is the first substantial entry in the discography of Animårum.

Coming back to that opening line, The Gaian Mind opens with “Icaro”, a term derived from Quechua that most commonly refers to Shamanic songs during healing ceremonies, and it starts off with chanting and rattling percussive instruments, so is presumably intended to give the impression that the following album is part of a psychedelic experience. The ambient sounds that follow on “Icaro” further contribute to this initial impression, but the metal that comprises the bulk of the record is rather less psychedelic. There are other sections on the album that tie in with the South American theme, including tribal percussion and drones during the outro of “The Missing Link”, as well as the soft closer “Cura” and the pipes and acoustic guitars that lay the foundation of that track; however, Animårum also namedrop terms related to Greek mythology (The Gaian Mind and “Ambrosia”), so I don’t know quite how committed they were to this theme.

As to how Animårum sound as a metal band, probably the easiest umbrella term is ‘progressive/technical death metal’. The Fallujah-esque atmospheric opening to “Unknown Perception” isn’t indicative of a persistent feature throughout the record, but similar moments do pop up again later in the song, and again in “Ambrosia”. The most ‘core’ sound of The Gaian Mind is fast, jagged technical riffing, but there are other approaches employed during the album. Animårum dabble with clean vocals in some more ‘soaring’ or atmospheric moments, writing decent melodic lines. Arguably more notable, however, is the presence of djent; the bulk of the middle of “Unknown Perception” sacrifices fast technicality of meaty polyrhythmic chugs and breakdowns, while “The Missing Link” similarly opens with dense grooves before getting stuck into blasts and elaborate technical guitar leads. Djent and tech-death are fairly natural bedfellows, and they work well in tandem on The Gaian Mind, tagging in for one another so that fast attacks alternate with easy headbanging fare.

There’s some very cool ideas across The Gaian Mind, whether they be the prog-death/djent interchanges or the Amazonian influences. These come together most effectively on “The Missing Link”, which is for my money the strongest song on the album. Animårum are still very early in their career, however, and there is room for the band to find a more natural synthesis of these ideas more consistently on subsequent records; the non-metal parts do feel a bit disconnected from the metal side of the album. Perhaps it’s just having so recently heard Mathan work so well to integrate the tribal influences within their death metal, but it would be interesting to see if Animårum could bring the non-metal sounds from the intro/outro/mid-album interlude into the metal sections to make their inclusion alongside each other more logical.

Additionally, the prog/tech-death parts are good, but not necessarily remarkable in and of themselves (although I do rather enjoy a more melodic groove early on in “Ambrosia”), so there’s still room for Animårum to craft songs that are as compelling as the underlying musical concept. However, for a first outing, The Gaian Mind is a very respectable effort.

Written on 22.01.2022 by
musclassia
Hey chief let's talk why not
More reviews by musclassia ››