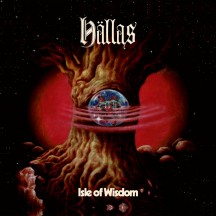 
The other kind of dad rock.

Look, I have no idea if any members of Hällas are dads. I don't wanna stalk their personal profiles or anything, but they've been making dad music since 2011, so every passing year has a higher chance of it actually being "by dads for dads". I also want to preface this entire thing that I don't mean to use the "dad" comparisons as something negative. I love dad rock. I love dads. I wanna be one someday. I wanna tell my kids to keep the flashlight steady while I'm fixing the heating. I wanna crack open a cold one while my kids mow the lawn. I wanna make dad jokes and tuck my shirt in so my hips aren't cold. I want this. And Hällas is the perfect soundtrack for that. Case in point, I don't really show my dad most of the music I listened to. I had no such reservation with this album. He loved it.

"Dad rock" is a term that is used both derogatorily and lovingly. Kinda like retro-thrash being called "pizza thrash". Hällas aren't really self-aware in any way, but I don't think they really need to be. I have reviewed their previous album, and whereas I haven't made any dad comparisons there, but I did notice the cheesy retro feeling that is there in spades. I mean, making prog rock that emulates the 70s is one thing, but the one aspect of their music that really really sold that feeling were the vocals, with the kind of low-intensity falsetto that feels so authentically in line with how a lot of prog rock vocalists weren't necessarily the best vocalists, since they were primarily great instrumentists, and as vocalist Tommy Alexandersson also acts as the group's bassist, it checks out.

As a group that self-categorizes itself as "adventure rock", they certainly do have a lot of the hard rock sounds of bands that generally get called power metal precursors, like Uriah Heep, along with retro-prog of acts like Phideaux, proto-metal like Thin Lizzy, and generally being quite an exciting mish-mash of 70s and 80s rock sounds. The 80s sound come from some of the NWOBHM-ish guitar harmonies and the synth use, the latter being something I lauded in the previous record too, but that feels even more developed here, as is made obvious from the opening track. Probably the biggest step up from Conundrum is that the production matches the epic tone of the record much better, making the immersion go even more smoothly.

So, while there's certainly a lot about Hällas that is derivative, and maybe I wished that they'd expand their sound a bit more since the last album, they're still able to make "dad rock" that actually feels ambitious, exciting, and good-spirited.

Written on 02.05.2022 by
RaduP
Doesn't matter that much to me if you agree with me, as long as you checked the album out.
More reviews by RaduP ››