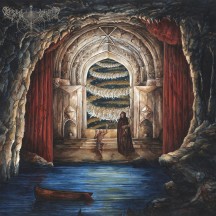 
Life in the cosmos is pretty brutal, eh?

When I first stumbled upon Gabriele Gramaglia's Cosmic Putrefaction, both me and Gabriele seemed to align in our OSDM phases. But even then, when I reviewed their debut, 2019's At The Threshold Of The Greatest Chasm, I liked it, but felt like there's plenty of room for development, almost feeling more excited for what he'd do with his other two projects. Well, neither of them released anything since, but Cosmic Putrefaction persevered with another album in 2020, which was a clear improvement but still not enough to completely win me over, especially since I was going through peak death metal fatigue. In the meantime, Gabriele also had some more collaborative projects, also death metal inspired, in Vertebra Atlantis (review here) and Turris Eburnea. So three years after stumbling upon Gabriele's work, I am once again compelled to review it.

The first thing of note is that this is the first Cosmic Putrefaction album not to be completely performed by Gabriele, with drumming duties taken by Giulio Galati (of Hideous Divinity and Nero di Marte fame, and the reason why I can't shorten Gabriele Gramaglia to G.G. anymore), and some guest vocal spots by fellow Vertebra Atlantis member Riccardo Nioin. Considering how collaborative 2021 was for Gabriele, it's no surprise how there's a bit more of that nature here as well. But the most interesting part about it was how in enhances aspects of Cosmic Putrefaction's sound to deliver on the promising sounds of the first two albums. While the OSDM core is still there for the most part, it's been morphed into a beast more dynamic in how it moves between atmospheric, brutal, and technical aspects of it.

Pretty much all three of those aspects were already part of At The Threshold Of The Greatest Chasm, but they're all present in a higher capacity here. While some of its moments are the closest that the project ever got to brutal death metal, even the most pummeling moments never shed all traces of melody and atmosphere building. With a new drummer at the helm, there's more room for exploration in all directions, and the calculated intricacies in the technical part do have a semblance of progressive death as well. Crepuscular Dirge For The Blessed Ones easily moves from section to section, from blistering solos, layered synths, tumultuous blasts, dissonant riffing that takes from death, black and grind alike, in a whirlwind that can often feel like "a lot". But it is herein where the calculated nature of it really helps it from leaning too much in a technical direction that might feel too impersonal or chops showcasing for the sake of chops showcasing. Because the chops are there.

Its technical proficiency often adds to the maddening atmosphere, but it creates an atmosphere nonetheless. Alongside its more melodic and synth-focused moments. There are plenty of pitfalls that the album could've fallen into, and I already mentioned the potential tackiness of the tech death, but it could've made its synths cheesy and overbearing, it could've relied to heavily on OSDM tropes or disso-death, or it could've just recycled its best sections. However the syncretism of all of its idiosyncrasies works in the album's favor, with its atmosphere eerie, and probably the first time I actually got a genuine "cosmic" vibe from a Cosmic Putrefaction album. Like music whose intricate dissonance is playing with the fabrics of reality, like death metal that tackles horror from a completely different perspective than B-movie worship.

And to think that at one point I thought this was the least promising of Gabriele's projects. And now it's my favorite.