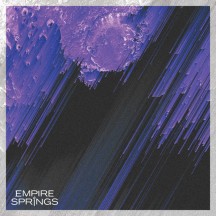 
Is it too corny to say that Empire Springs glow brightly on The Luminescence? Probably, but I couldn’t think of a better way to start this review.

The Luminescence is the debut full-length of Empire Springs from Birmingham, Alabama, which is rather less renowned for its metal music than the British city it copied the name of. It seems that the band only sprung up within the last year or so, as I cannot find any record of them prior to 2021 (Ed: Nejde has proven this to be baloney); however, they’ve been busy enough during that time that neither of their first two singles, “Broken Glass” and “Ascend”, appear on this album, despite both of them only dropping at the beginning of 2022. Presumably, the exclusion of these tracks comes down to theme, as Empire Springs state that The Luminescence is a concept album; however, the material that does feature on this album is strong enough that the absence of those songs does not leave a void.

The Luminescence was produced with the help of John Douglass and Eric Guenther, both known for their previous work with The Contortionist, and the selection of this duo as producers makes complete sense when listening to parts of The Luminescence; the mellow prog, keyboard lines and husky singing Empire Springs present on “Transit” bears an uncanny resemblance to multiple tracks from The Contortionist’s Clairvoyant. However, this is not a rip-off of The Contortionist; Empire Springs span a whole range of sounds from across the current prog-metal landscape on The Luminescence such that it’s impossible to pinpoint any one band as a leading influence.

As much as “Transit” revels in the understated, Empire Springs can be loud and immediate, as the hefty arpeggios in “Neptune” demonstrate; this acts as a watershed between “Transit” and the louder, more complex “Galatia”. However, “This Place” shows an immediate U-turn in terms of overt complexity, as some of the melodic overtones of this track have a poppiness that reminds me of acts such as Owl City, with Brett Bellomy’s moving cleans feeling particularly direct at times. This song, and the album as a whole, certainly won’t be for the metal purists, but I doubt any of them read my reviews anyway. For those, like myself, with more of a sweet tooth for these kinds of things, “This Place” and the following title track scratch a similar kind of itch to Eidola’s The Architect at times, a record I’ve given plenty of airtime to in the half-year since its release.

When I mentioned earlier that Empire Springs take inspiration from a wide range of prog-metal sounds, that does not exclude djent, as there are subtle signs of djent-riffication across The Luminescence; however, it’s very much a background rarity, even more so than on Clæmus’ debut from last year. There are also hints of proggy metalcore, as a couple of tracks feature muted screams in specific moments, but this is very much a melodic prog album first and foremost, and it pulls that off really nicely with irresistible hooks such as the chorus of “Drawing Lines”. All of these moments come together in parts of closing track “Protector”, which also features more Clairvoyant-style keyboard, plus a solo towards the end that shows off a more classic side to Empire Springs, one that derives as much from Dream Theater’s more melodic work as it does any current trends.

With luscious soundscapes, enticing melody, touching vocals and an array of well-integrated influences, The Luminescence is a delectable first outing from Empire Springs, one that holds the listener in a tender embrace.

Written on 18.05.2022 by
musclassia
Hey chief let's talk why not
More reviews by musclassia ››