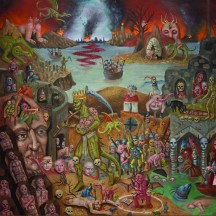 
When I checked out Terror Cósmico’s Miasma, I saw it classified as stoner metal, which seemed a bit at odds with the freaky artwork and ‘cosmic horror’ band name. As it turns out, there’s stoner metal here, but also sludge, doom, post-metal, death and even a bit of black metal; that’s not the easiest clash of sounds to envisage, but Terror Cósmico pull it off.

It’s not all of those at once, obviously; Terror Cósmico traverse a range of sounds across Miasma, their full-length record. Also, to make the combination of styles a bit more conceivable, they play a style of fiery, hair-on-chest stoner metal that’s close to the sludgy High On Fire end of the spectrum. The evil, ferocious tonality they drag out of their guitars on high-octane brawlers such as “Carbunco” and the doomy trudge of “Alguien Vendrá Desde El Fondo Del Mar” lends the band perfectly positioned to take their music in darker directions, and that is exactly what they do.

For the most part, Miasma is an instrumental-only record, although it doesn’t really feel like one; both the energy and the density of the sound that this Mexican duo conjure up seem purpose-built for some Matt Pike-style howls. With all this volume, it’s surprising that perhaps the highlight of the record is a track that largely eschews it; “En Un Lugar Frío Y Desolado” comes along early on Miasma to highlight a delicate and vulnerable side to Terror Cósmico that is pretty much never heard again afterwards. The melancholic tones heard in this track and well-paced evolutions between loud and soft hint at a successful future as a post-metal band if Terror Cósmico ever commit more heavily to this approach, so it is surprising to see it pretty much abandoned pretty much as soon as this song finishes. Still, with how gnarly the sludgy riffs are on “Las Máquinas Colapsan”, it’s not necessarily something that one ends up missing.

Consistency is really the only thing one might look at as something to work on when listening to Miasma; well, that, and making sure to finish every song properly, as the abrupt conclusion to “Las Máquinas Colapsan” just sounds like a production error, even if it was intentional. Just as the gentler post-metal tendencies sound great on “En Un Lugar Frío Y Desolado”, the more extreme metal inclinations on the closing tracks work similarly well, and the anguished harsh vocals that appear midway through closing track “Se Mueren” are very capable and have a potent rawness to them. However, the fact that these vocals only appear in the final five minutes of a 50-minute record, or that there’s 5 minutes of clean tones early on that never return, does leave Miasma feeling ever so slightly disjointed.

Still, all the building blocks are very much there here; the guitar tone is nasty, the riffs are strong, the drumming (particularly when the toms are more heavily used) really accentuates the atmosphere of the record, and Terror Cósmico are capable at moving between several different metal styles without losing their touch. If they can integrate those sounds a bit more effectively, they could really be onto something special.

Written on 24.05.2022 by
musclassia
Hey chief let's talk why not
More reviews by musclassia ››