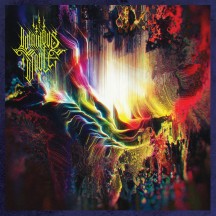 It would probably be wrong to call the Luminous Vault duo as "the work of a dark ambient composer", since it is a duo and bassist Samuel Smith (also of Artificial Brain, Fawn Limbs and Aeviterne) might have a bigger influence over the sound than I'm giving him credit for. But Luminous Vault has a pretty unique sound that is steeped in dark electronic atmosphere, the kind you'd put under the "industrial" umbrella term. Mario Diaz de León has been composing music that falls under either the dark ambient or the progressive electronic or the chamber music umbrellas. Either solo, or under the Oneirogen alias, or in the Bloodmist project he has with Kayo Dot's Toby Driver. And considering the soundscapes of Animate The Emptiness, my money is more on the musician with the dark ambient background rather that the experimental death metal.

But Animate The Emptiness is the work of both of them and it sounds like nothing that either of them have made. I would go as far as to say that it sounds like nothing that has been made period, since all other industrial metal projects that sound similar, from Godflesh to Blut Aus Nord to P.H.O.B.O.S., still sound distinct enough from each other and from Luminous Vault to really call it wearing an influence on the sleeve. I called it "industrial black metal", but the truth is that the more clearly metal side of Animate The Emptiness lingers in wider areas than merely black metal, so much so that I'd say it's more often more doom or more sludge or more death, while still retaining a slight preference from the black metal territories.

"Cold" and "mechanical" are words that are mandatory in any industrial metal review, so you probably know by now that the drumming is digital and has that industrial feel. Couple that with dissonantly melodic black metal guitar leads that lie in the slower tempos, and with sprawling bass that constantly maintains an imposing presence, and with growls that feel more ghoulish than anything else. There's a lot in the way of melody, intricacies, and atmosphere just from the combination of these, but then you add the pulsating synth melodies, and you have something that feels like the trip-hop version of Emptiness. The electronic side of this album might have some varied nuances, from trip-hop to dub to progressive electronic, but the powerful bass and mechanized drum combination leaves it no other place but to feel anchored in industrial metal.

Just like its cover art, Animate The Emptiness is a very colorful album, and I'd dare say even a psychedelic one, but with the kind of trip that leaves you lethargic in bed. There's very little here that I'd call "crushing", even though there's plenty of heaviness to be found, but the mood it is building is definitely a very draining one, and I mean that in the best way possible. It's ethereal in its very specific way, and it's intricacies courtesy of the modern classical background do make it an interesting listen beyond the surface mood setter.

Written on 29.05.2022 by
RaduP
Doesn't matter that much to me if you agree with me, as long as you checked the album out.
More reviews by RaduP ››