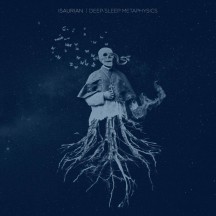 Coming from Brazil, Isaurian have been tagged under the ‘doomgaze’ umbrella (doomgaze, not voidgaze, Spotify) since their debut record, Chains Of Blue, came out in 2020. This particular musical term, which exhibits varying overlap of shoegaze, post-rock/metal and doom, has found increasing use in the past few years, but if you’re looking for a band to use as a reference point, I found Chains Of Blue reminded me more of Arctic Sleep than anyone else. The band’s second album, Deep Sleep Metaphysics, is described by Isaurian as an album whose ‘intensity and vibe is a direct result’ of being composed and recorded during the pandemic, and perhaps unsurprisingly, the ratios of those integral elements, and the resulting output, have shifted as a result of the circumstances of the album’s creation.

Concerning the ‘short’ part in that opening line, Deep Sleep Metaphysics is only 36 minutes long. That’s not too bad, until you see that track 6 is actually track 1, “Árida”, but with a different mix, albeit one that would take an awful lot of side-by-side comparison to differentiate from the 'original'. This reminds me of Votum’s Duhkha, which also had 6 tracks, with one of them an alternative version of the opener. In both cases, I’ve found it to be a slightly strange decision; the long and short of it, though, is that Deep Sleep Metaphysics is effectively 29 minutes long, making it border on EP length. I think it’s fair to say that it’s short; however, the ‘sweet’ part of that idiom is equally applicable for Deep Sleep Metaphysics.

As far as those components are concerned, the main thing to note here is that the doom, and to be honest, the metal, are less of a factor this time around. Instead, there’s a lot of post-rock here, and a lot of shoegaze; many albums linger on the boundary between ‘heavy post-rock’ and ‘post-metal’, and Deep Sleep Metaphysics is on the rock/metal borderline. That increased focus on lighter styles comes with an increased presence of beautiful, melancholic music, and this album is very much beautiful. To start with, as much as I don’t really get why “Árida” is included twice, it is a great song, and considering I often play albums that I’m going to review on loop, I didn’t notice much difference when it came in at the end of each playthrough. The mixture of sad, touching guitar melodies, heavier distortion and Hoanna Aragão’s passionate, sorrowful singing comes together wonderfully on this track, and the post-rock ebb and flow of the track enhances the emotional weight of the louder parts really well.

Considering the other four songs on the album have to compete with “Árida” not once, but twice, they better bring the goods in order to stand out. While nothing here quite matches “Árida” in terms of impact, each track does bring something to the table, not least because of the variation in style between songs. When I mentioned that ‘doomgaze’ seems to entail shoegaze, post-rock and doom, there’s one song on Deep Sleep Metaphysics where each of these takes more of a leading role; the first of them is “For Hypnos”, which in moments takes my mind towards songs such as Ride’s shoegaze classic “Leave Them All Behind”. The piano-driven “The Dream To End All Dreams” highlights the band’s connections to post-rock, while the more metallic “Autumn Eyes” reminds listeners of those doom links, particularly when Jorge Rabelo’s harsh vocals enter the picture, although there is still very much plenty of delicate melody to be heard here, and Aragão continues to shine in these heavier tracks.

It's interesting to see the directions in which darkness can drive musicians’ creativity; I imagine some post-Covid records describing ‘vibe’ and ‘intensity’ will be channeling plenty of aggression and grimness, but Deep Sleep Metaphysics, while clearly exhibiting a lingering sadness, embraces the beauty in music as well. In exploring the sounds featured on this record, Isaurian manage to evade any sense of tweeness; the material here feels heartfelt and substantial, and therefore ultimately rewarding. It is a brief listen, but it’s definitely got the content to compel you to listen to it enough to compensate for the length.

Written on 02.06.2022 by
musclassia
Hey chief let's talk why not
More reviews by musclassia ››