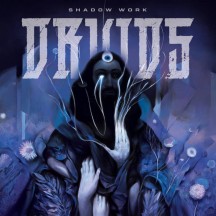 
There’s times when you look at a festival line-up or label roster and are intrigued over how one particular band fits in with the rest; I recently had that when I saw a stoner metal band on a predominanty sludge/prog/post-metal label. Surprises can be positive though, as proven by Pelagic Records’ latest slam dunk.

I already lauded Pelagic’s golden touch in my review of Playgrounded’s top-notch The Death Of Death earlier this year, and it was in the process of preparing that review that I saw the name of Druids for the first time, with the band’s third full-length and label debut Shadow Work scheduled for release a couple of months afterwards. While I didn’t look further into the group at the time, I made sure to check it out when it dropped, and now it’s here, I’m starting to understand what inspired Pelagic to bring Druids on board.

Druids are a stoner metal band, but they’re also a sludge band to a slightly lesser degree, and both styles are run through a prog-metal blender. Now, if you’re seeing those genre tags thrown together and have the likes of Mastodon, Dvne, Elder or Sunnata coming to mind, you’re on the right lines in terms of sounds and influences, as I can hear sections reminiscent of each of those bands scattered across the album. However, Druids are a less hectic band than most of the above; while they can clearly play their instruments, there’s much less frequent occurrence of busy guitar leads compared with the likes of Mastodon and Dvne. Instead, Druids are a bit more oriented towards riffs and atmosphere, and are very well off for it.

In terms of sounding atmospheric, the slow brooding nature of “Othenian Blood” shows some clear hallmarks of Mastodon’s darker material; when the harsher vocals come in, I almost think I’m listening to one of their Scott Kelly collaborations. On the matter of Mastodon-sounding vocals, the shouting style used in the first half of “Ide’s Koan” has more than a hint of Troy Sanders to it (albeit not to the extent that Vokonis replicated his tone). Still, it’s not all doom and gloom; “Hide” has a lighter-pitched singing tone to go with the more up-tempo and driven semi-anthem vibes of this track, with this track nicely representing Druids at their most accessible.

“Hide” is the most ‘straightforward’ song on the album, but one of the main strengths that makes Shadow Work shine in the way it does is the variety of ways in which Druids veer away from that. The other songs that have a similar focus on cleaner vocals, “Path To R” and “Cloak-Nior Bloom”, are more instrumentally elaborate, with both going in more of an Elder direction with their solos, not to mention them channeling Dvne early in “Cloak-Nior Bloom” with some highly impressive harmonized guitar leads. These songs have some great moments, with “Cloak-Nior Bloom” providing a particularly lovely outro to the album. However, less lovely but similarly satisfying is “Ide’s Koan”, whose rowdy outro features a drive to it that stands out from most of the album, reminding me of Sunnata’s Outlands album. There is some drive to “Traveller”, but this short track surprises in its own way, utilizing a monotone semi-chanted vocal style that draws easily parallels to Al Cisneros in Om.

One of the most satisfying changes of direction Druids takes listeners on across Shadow Work, however, is when they dive into darker percussive stretches, something they do great back-to-back on “Dance Of Skulls” and “Othenian Blood”. The former takes a wild turn midway through, as a bruising sludgy doom first half morphs into an energetic drumming whirlwind that is one of the highlights of the album. The only section that might beat it out, for me, is when the band bring tribal drumming out later on in “Othenian Blood”; the gnarly bass chug and grim vocals draws tribute, as much as anything, from some Neurosis moments, and while it doesn’t expand as nearly as much as Neurosis do with their music, it does replicate some of that brooding intensity.

Shadow Work has a really satisfying spread of ideas that allows it to scratch a lot of itches in one playthrough; Druids show themselves to be similarly comfortable with whatever approach they’re applying to a track, with the end result consistently satisfying. Without perhaps having too many moments that blow me away (which meant that it took a couple of playthroughs to really start working its charm), Shadow Work keeps me happy throughout.

Written on 11.06.2022 by
musclassia
Hey chief let's talk why not
More reviews by musclassia ››