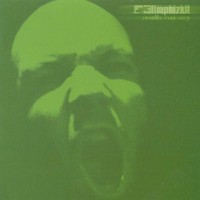 As the apparent designated Limp Bizkit reviewer (it ain’t much, but it’s honest work), I have come to three conclusions: 1) this is why my parents are disappointed in me and probably why my mum ran away before I was born, 2) I’ve never actually eaten a cookie before as I’ve never been able to dislodge it from... places and 3) they deserve slightly more credit than is often given to them.

So it has come to this, Results May Vary (foreboding), the album that is shorn of the band’s greatest asset in Wes Borland, who had left Limp Bizkit during this period. So what effect does this have on the music? Well, that foreboding title proves to be very apt.

How so? Well, there are moments here and there that the band are able to show life beyond Borland, with Rivers, Otto and Lethal ensuring that there is a decent rhythm section throughout the album, though they may not necessarily be utilized to the best of their abilities. There are also tracks that, while not amongst their best work, are surprisingly strong, with “Eat You Alive”, “Let Me Down”, “Creamer (Radio Is Dead)” and “Phenomenon” being enjoyable tracks.

“Phenomenon” however, shares the same problem with “Gimme The Mic”, in that it has some good musicianship but it is nearly derailed by the common problem throughout this album, namely that Durst is at his lowest ebb on Results May Vary and, in fact, you should keep the mic away from him. While he has always been the weak link in the band, he has always been tolerable thanks to the strength of the band behind him; here, however, he manages to be so bad that the band cannot compensate for him. Read up the lyrics to “Eat You Alive”, “Down Another Day” and “Phenomenon” to see why (and actually understand what he is singing) and listen to “Underneath The Gun” to hear why.

There are moments scattered across the album where indeeed results may have varied if Borland had still been a part of the band. Tracks like “Build A Bridge”, “Head For The Barricade” and “The Only One” are ok in their current shapes, but you get the feeling that if Borland had been present to do some of the wizardry he is famous for, then these songs would be classics rather than just enjoyable in their current forms.

I’ll give credit where it is due, the tracks that are good are more enjoyable than I would have expected without Borland; the problem with Results May Vary is that the bad songs are among the worst they have produced and make for a heavy counterweight to the enjoyable tracks. “Down Another Day” is one of the most woeful teenage angst shlock ballads I’ve heard, with poor vocals and meandering musicianship, “Almost Over” is repetitive to a fault and “Behind Blue Eyes” is only beaten by “Home Sweet Home” as the band’s worst cover.

Results May Vary is indeed an apt title, not as good as their previous work for fans of the band, but even worse than before for detractors of the band. It’s been a nice change of pace taking a trip back to 2003 and dipping my toe back into nu metal, but I think its time that I hang up my red baseball cap and give myself a well earned break from the band for awhile.