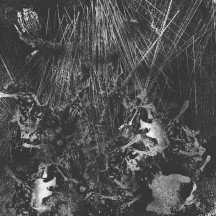 
Fellas, your grindcore has to be absolutely unrelenting, noisy, pummeling. Do the right thing. Add a trumpet.

It's common knowledge that grindcore is one of the most extreme genres there are, at least in terms of the crossover between punk and metal. It is the "OUGH" of music. It's fast, heavy, and often makes no sense. Some punkier branches like powerviolence or mincecore or mathcore do exist, and they're often employed by grindcore bands to be even grindier, while the more metal side has deathgrind and sludge metal as neighbors. Needless to say, playing a genre that is so enamored with its own extremity does lead to sometimes it feeling like either bands trying to one up each other in extremity or just incoherent extremity. It is what it is, but even with all the mixing things up that bands do, you don't listen to grind for the arpeggios. You listen to grind to get your socks blown off.

Definitely, there are musical reasons to listen to grindcore, hence why you have good grind and bad grind and false grind. You have riffs that are worth remembering. If you look at the booklet, sometimes you find lyrics. Knoll have riffs galore, and their Bandcamp page confirms the presence of lyrics, so you can cross those off the checklist. When I reviewed their debut album, I was pointing out that this new wave of grind is in a point where it is approaching some stagnation, and even if Knoll aren't reinventing the wheel, they're still vital enough to make a difference, and the variety in sound within this framework of extremity was still nothing to scoff at. A split album with Autolith later, Metempiric builds upon that foundation.

Metempiric already feels like it has a bit more dynamics than its predecessor, and a lot of it comes in the 8 minute closer "Tome" that moves from grind to sludge to noisy dark ambient, while the rest of the dynamics resides in the occasional use of the trumpet for extra eerie soundscape. But, as I said, you don't listen to grind for the dynamics. They're good to make sure you don't suffer extremity exhaustion, and it helps Knoll justify its nearly 35 minute album runtimes. What Knoll do best is blowing socks off. It's alternating OSDM growls with "dying weasel" banshee screams. It's riffs whose mass is so humongous that they might spawn a black hole in your speakers. It's noise indescribable to your neighbors that would get you banned from the aux cord. And when these two facts come together, you whether it's good grind or bad grind.

Hint: it's not bad grind.

Written on 03.07.2022 by
RaduP
Doesn't matter that much to me if you agree with me, as long as you checked the album out.
More reviews by RaduP ››