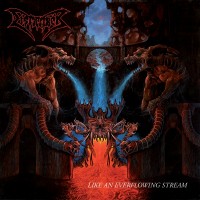 
This music is not meant for easy listeners on a family road trip or vacation, or anything like that; it's death metal after all,. Still, the Swedish death metal scene showed us that it needn't just be about having outrageously heavy guitar tone and bass, with deep harsh growls, and brutal lyrics, but that death metal could also be very fun and groovy, with great catchy melodies too. You could even argue that this was where the true origins of what was to become melodic death metal had actually began.

One of the most well known debates in death metal history has always been: which one out of [Left Hand Path and Like An Ever Flowing Stream is best? Or who is the ultimate Swedish death metal band, Entombed or Dismember? For me, it really doesn't matter; I get equal enjoyment out of both bands, and the same goes for those two classic albums, as both of these debuts are equally as iconic in their own right. Now, of course, Dismember had adopted the buzzsaw guitar tone from Entombed's Left Hand Path, but then, why not? It had proven to be so effective, and so became an essential asset to the early Swedish death metal scene, one that still sounds phenomenal to this day.

Now, I must first point out that the opening song, "Override Of The Overture", is clearly the standout track on this album, of which the same can be said for the opening title track on Entombed's Left Hand Path; both songs had an eerie ambient opening that erupted into a song filled with memorable moments, both with excellent solos, terrific songwriting and of course a tremendous memorable central riff. So, there are clear similarities right from the off between the two albums, but where these albums differ is in the riff department. Entombed had a much more general in-your-face brutal approach, yet still managed to maintain an element of groove, whereas Dismember had opted for an even more melodic approach; they still retained that heavy, brutal sound, but they did hold back slightly.

Now of course I've mentioned the opening track, which is going to be most people's choice of best song on the album, but there are other standout songson this album too; "In Death's Sleep" and "Dismembered" are arguably the next two best tracks, perhaps because they are the two longest songs on the album too, both having slower ambient build-ups compared with the other songs on the album and more varied structures. The rest of the tracks are much shorter than the three I already mentioned, but all contain great riffs, and flow effortlessly into one another.

The vocal performance here is excellent; the deep harsh growls had a slightly eerie effect that fit in perfectly well with the instruments. The drumming beats, heavy bass and groovy rhythm had all been structured excellently, and along with the buzzsaw guitar effect and gut wrenching lyrics. The whole sound and structure set the tone for a sheer vibe of horrific terror. You can almost imagine being chased by a lunatic with a chainsaw in the woods. Because the riffs are so damn melodic and groovy, there is oddly a humourous side to it; think of this album as the film Braindead, as opposed to The Texas Chainsaw Massacre, which would better describe the heavier, deeper and more sinister style in which Floridan death metal bands such as Obituary would play.

This isn't just a classic because of the significance it had during the time of its release, but musically it still holds up as one of the best ever albums in death metal. While some albums tend to age over time, this has done the opposite; it's always managed to retain that fresh sound, one that modern death metal acts still use today.