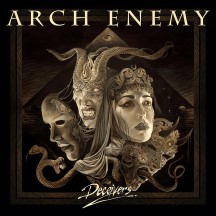 
“Hello? Yes, I would like to report a crime. I have been abducted. Woke up in Gothenburg sometimes in the early 2000s, and I’ve no idea how to get back. You’ll send someone? How? Police cars are equipped with temporal displacers now?”

With roughly 600 000 inhabitants, Gothenburg (Göteborg) is Sweden’s second-largest city, and the capital of Gothia (Götaland), the southernmost of the three lands of Sweden, where I also happen to live. I’ve rarely been to Gothenburg, as it is a three-hour car trip and train connections east-to-west are lacking at best. I’ve driven a car there once, and let me tell you, trams are the worst thing ever. However, everybody probably knows the story about Gothenburg metal at this point, and should you not, just listen to Arch Enemy for a while, and you’ll understand exactly what the style is all about.

So, Arch Enemy abducted me to Gothenburg, circa year 2004, to play me their heavily Gothenburg-influenced brand of thrashy melodeath. At first, I was not won over (and later on, perhaps I was only suffering from Stockholm… I mean, Gothenburg syndrome). “Handshake With Hell” is a pretty boring tune, that is, until the final section where a surprising, atmospheric part breaks off the endless shredding and screaming with Alissa White-Gluz singing a folky melody in a sort of ominous-yet-sweet clean voice: “Fool me once, and I’m done / Twice, and I’m dumb / Thrice, and I’ll not be fooled again.” Yeah, the lyrics are beyond stupid throughout the album, but the delivery here made me forgive their abduction and stay along for the gig.

Next, Arch Enemy go all-out thrash-hardcore on “Deceiver, Deceiver”, with a seriously headbangable main riff that doesn’t go into melodeath territory except for the chorus, yet only slightly even then. Credit where credit is due, Alissa has a splendid voice, both her harsh and clean singing being filled with a sort of playful ferocity, and Jeff Loomis’ lead guitars and shredding solos are exactly what I’ll be writing home about (assuming I’ll ever get back to my own time - the 00s weren’t exactly a happy time for me, and I’d like to return now, please?). This was not to be. “In The Eye Of The Storm” is the most 00s metal sounding track on Deceivers. It sounds like Clayman-era In Flames, no more, no less. I’m sure there are people back home in year 2022 who enjoy this crap still, but it bores me to tears.

The best parts of Deceiver are the less anthemic tracks, such as “The Watcher” with its memorable, catchy lead guitar supporting the chorus before the song devolves time and again into a fast-paced, brutal deathcore assault. It is here I realise how excellent the performance quality is all around. Every guitar solo shreds like there were no tomorrow, every vocal line is delivered with panache, the drums support everyone else in a high-octane fuelled, accentuating way, and in “Sunset Of The Empire” Sharlee D’Angelo gets to show his serious bass work chops. “Sunset Of The Empire” is, by far, the best song on here. It is thrashy, violent, melodic, anthemic, and slightly orchestral, all rolled into one. Beats me why they didn’t choose it as a first single.

After being bound and gagged in a 2000s Gothenburg cellar watching Arch Enemy play me their new Deceivers album for the better part of an hour, I start getting restless. Sure, “Morning Star” is a short interlude, and there are really only 10 tracks in their set list, but it somehow feels like many more - a few too many. I prefer my albums short and sweet, and if they are not, then there needs to be more variety than this to keep my interest. There’s a filler track or two here, especially towards the end. But don’t tell them I said that, not until I get a hold of Temporal Investigations and can return to my decade. This is some proper high school music, and I’m an adult (or so I keep telling everyone).

Deceivers is good. It’s even better than I expected it to be. It’s good, but not great, but it is damn entertaining, and I forgive Arch Enemy’s abduction tactics, because I had a great time listening to it… but I will probably never hear it again.