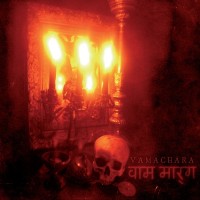 
Black metal. The bitter-cold music of darkness. Throughout the history of this genre, various bands have focused on the importance of different features: repetitive riffs, blast-beat drumming, raspy vocals, Satanic lyrics, the inclusion of folk elements, crossovers with other subgenres, intentionally raw production. But the most essential element - the attribute which exemplifies all great black metal acts - is atmosphere. And few bands have ever crafted such a mesmerizing ambience as on Acherontas's Vamachara.

Acherontas's roots began already in the late 90s, when the band performed under the name Stutthof. In a span of a decade, the band released three full-length albums and several split releases. Despite the controversial NS name and some allusions to blood-and-soil ideology in their earliest releases, the band has since wholeheartedly stayed away from any racist ideas and instead embraced mysticism, spirituality, and occult lyrical themes. For instance, they refer to their band as a coven, their founding member calls himself a priest, and the candelabra featured on the cover of this album is a staple of their smoke-shrouded live performances (or "rituals"). With phrases such as "Sumerian mysteries", "rune magick", "draconian path", and "astral vampirism" mentioned throughout interviews and lyrics, the band delve into obscure religions of various cultures throughout history and across the globe.

Changing their name to Acherontas in 2007 (named after the river Acheron in their homeland of Greece), the band completely devoted itself to occult legends, cutting off all ties to any prior political views. As their priest has said in an interview, they shed their skin like a serpent, revealing the true core of their coven with Acherontas. While their later albums would prominently use keyboards to expand their atmospheric style, their earlier albums leaned heavily on the inspirations of the 90s meloblack classics from Scandinavia. Of these early albums, I believe their third full-length release Vamachara (which is the Sanskrit term for the infamous left-hand path) exemplifies a perfect balance of ambient and dynamic black metal.

The first song of Vamachara acts as an introduction, setting the mood for the rest of the album. Admittedly, it starts off with some cheesy shouting about summoning the power of "the four winds" and other incantations. But soon the song shifts, making way for a more eerie tone: an overlap of indiscernible whispering, trumpets blaring, and the sound of screeching hinges as a gate opens wide. "The Eye within the Storm of Chaos is opened!" There's a pause of uneasy silence, before the second track kicks off with a triumphant guitar riff that reawakens the beautiful and majestic soundscapes of Dissection's classic era.

Throughout the album, the band make use of various musical influences from the black metal scene. Their fast-paced instrumentation takes inspiration from Swedish meloblack acts such as Dissection and Sacramentum. Occasional symphonic elements are reminiscent of Norwegian giants Emperor, while the ghoulish vocals are akin to Mayhem. However, Acherontas also employ many calmer, moody moments that pay tribute to gothic metal. For instance, on track 3, some eerie riffing transitions into a passage filled with tantalising chimes and mystical keyboard playing. The unrelenting, energetic guitar-work returns for the title track, which offers some impressively pained wails from the singer, before finishing with a harmonic dual guitar solo that sounds surprisingly like NWOBHM or power metal even!

With all of these different styles working together so expertly, the band are able to clearly separate themselves from the familiar, traditional bass-heavy style of fellow Greek bands like Varathron, Rotting Christ, and Necromantia.

While the first half of Vamachara is immensely enjoyable, and I could listen to "Blood Current Illumination" all night long, the true pinnacle of Acherontas's art is achieved in the last 3 songs. "Ohm Krim Kali" is the track featuring the most ambience. The incessant, hypnotic chanting and the calm, oriental melodies put the listener into a warm, comfortable trance. But as the music progresses, a sense of unease arises, and suddenly one feels as if trapped by cultists in an incense-shrouded dungeon! With every new listen, there's always something new to discover within this dense, multi-layered musicianship, such as trying to decipher the little whispers and chantings throughout the album that no one seems to have successfully documented to this day.

After track 6, which is filled to the brim with so many magical riffs to make Jon Nödtveidt of Dissection proud, the finale titled "Drakonian Womb" begins with ominous drumming, invoking images of a marching army. Taking its time as the tension builds up, the song ultimately culminates in a firestorm of musicianship - all the instruments overlap and the hateful cries of the priest set the air aflame. It's an 11-minute epic that shows off all of Acherontas's talent, including a chanting chorus and a flourishing assortment of soaring riffs, before ending with a soft, mournful melody that pulls at one's heartstrings.

In conclusion, while the individual instrumentation of Acherontas is not necessarily original (coming late to the party after the classic black metal releases of the 90s), what sets the album apart as a masterpiece of the genre is how it effortlessly combines so many inspirations. Vamachara strikes that perfect balance between sinister and eerie atmosphere, serene and beautiful ambience, and aggressive, rapid-fire, blast-beat-loving goodness!

Just as the theater plays of their ancient Greek ancestors were famous for their soul-cleansing catharsis, one is left with feelings of melancholy, tranquillity, and a desire for more as one hears Vamachara's final tunes fade to black.
Written by F3ynman2000 | 24.08.2022