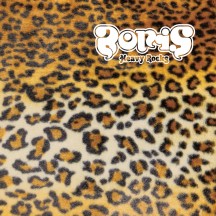 I'm beginning to turn into our resident Borisfile. In the past couple of years I've already reviewed Boris three times, first their hardcore-leaning NO, then the ambient noisy Merzbow collab 2R0I2P0, and this year the bewildering W. And the reason why I can so safely be confident that I'll find words to say about new material by such a prolific band is that, even within their usual stoner/sludge/drone bubble, they find a whole lot of variation and experimentation, and even 25 years later, the band is not settling for any conventional sound. And that's even weirder considering that this is the third time they're releasing an album called Heavy Rocks. But then again, they also released one called New Album. Album names might just not be their strongest point.

The previous two Heavy Rocks albums, the noisier 2002 one and the more psychedelic 2011 one, have a pretty high standing in Boris' catalog, especially the former, with it being the first Boris album not to be first and foremost drone metal. For the most part they're stoner metal records, fused with a bunch of sludge and noise rock and post-metal and the like, but stoner metal. Here's where this Heavy Rocks stands out. Here stoner metal is a much smaller element in comparison to the noisy and explosive amalgamation of hardcore punk, drone, sludge, and something you can only call experimental rock. In a way, Heavy Rocks III sounds more like a mix of the three Boris albums I reviewed than anything from the previous two Heavy Rocks.

There's huge punk emphasis, from the very first notes of "She Is Burning" to the D-beat of "Cramper" to the breakneck speeds and gang chorus of "Ruins". A lot of it is, in addition to being arguably the fastest of Boris' music, pushing hard into noise rock. Sometimes to a very sludge bass-heavy effect like in "Blah Blah Blah". Some of the aforementioned songs also feature a saxophone, an instrument whose usage in metal is getting less and less surprising, here used to some pretty abrasive effect. The experimentation continues down the line, with Boris alternating the noisy punk fast paces with some droning doom paces in "Blah Blah Blah" and "Question 1" before turning almost funeral doom with the choirs in "Nosferatou". "Ghostly Imagination" takes the industrial side of the noise so far and turns it into an electro-industrial crusher of overwhelming dissonance. And to top it all off, the album ends with a piano ballad, which in turn ends abruptly.

I'm generally opposed to song-by-song reviews, instead preferring to somehow grasp and explain the overall essence of an album. But Boris have packed so many left-turns in this album that I have to exemplify some of them. Thankfully most of them are not single-song contained, so you'll find huge pace contrasts, overwhelming noise, punk energy, saxophone incursions, and more than enough to still warrant calling Boris surprising more than three dozens of records in. To the point where I feel like I'm spoiling the album by describing it. Sorry.

Written on 16.08.2022 by
RaduP
Doesn't matter that much to me if you agree with me, as long as you checked the album out.
More reviews by RaduP ››