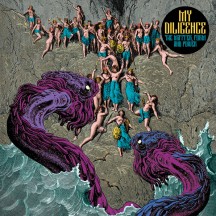 
I can’t have been very diligent if I managed to overlook My Diligence’s new record up until now, but the matter, form and power of this album have definitely converted me.

This Belgian power trio have been plugging away for a decade now, and have been quietly evolving as they gather momentum. Their self-titled debut introduced them as a band somewhere within the stoner/psychedelic rock-metal spectrum, albeit with a penchant for heavy alternative styles as well. Sophomore record Sun Rose saw My Diligence both refine the unpolished promise of their debut and introduce progressive and sludgy influences, and The Matter, Form And Power represents the next stage in the band’s growth.

If asked to label this new album with only one genre classification, I would perhaps still be willing to bestow the title of ‘stoner metal’ onto it, but much like Spaceslug’s 2021 album Memorial, it’s a connection that’s starting to feel slightly tenuous. The slick lead guitar melodies, brooding fuzz and hazy vocals that define large portions of the title track, and the groove of “Multiversal Tree”, maintain ties to the band’s earlier material, while the vocal hooks on “On The Wire” reminiscent of bands such as Jane’s Addiction highlight the influence of the 90s alternative rock/metal scene on My Diligence.

However, there’s a tendency towards harder, thicker trudges, and an inclination to use harsher vocals, that sees The Matter, Form And Power position itself closer to sludge than the previous couple of albums, and there’s new influences still to be heard. Furthering the parallels with Memorial, My Diligence’s latest brings in elements of post-metal; however, while Memorial exhibited shades of My Diligence’s compatriots in Amenra in the grim, ritualistic crawls in certain songs, the Belgian trio veer closer to Cult Of Luna on album centrepiece “Celestial Kingdom”, particularly in the intense, brooding climax of the song.

In contrast to the array of bands within the stoner metal scene that pick a generic sound and stick rigidly to it, My Diligence are brave enough to see how far the boundaries of their own approach can be spread, and it pays off for the most part. There’s times where the mix of influences can feel slightly haphazard; in particular, the harsh vocals feel slightly redundant in some sections, while “Embers” is a bit too packed with ideas that don’t have the time they perhaps deserve to develop before the band move onto something else. On the flip side, when it works well, the proggy stoner/sludge fusion works very nicely, and those post-metal inclinations are a strong addition to an already solid base; all these sounds come together nicely on the album’s sprawling, multi-faceted closing song, “Elasmotherium”, where melody, atmosphere and aggression unite in fine style.

With the rate of progression across their three albums so far, one can only imagine what steps forward My Diligence can take on their fourth album. Whether that turns out to involve the incorporation of even more new sounds, or a consolidation of what they’ve already brought to the fold, remains to be seen, but while there is definitely still room to improve in order to deliver the finest rendition of everything that appears on The Matter, Form And Power, this current rendition is certainly not to be trifled with.

Written on 16.08.2022 by
musclassia
Hey chief let's talk why not
More reviews by musclassia ››