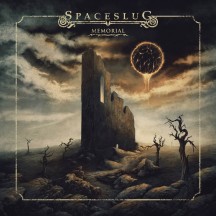 
I pump out three reviews of stoner/psychedelic albums from established bands released on the same day, and it turns out that the best stoner album of the month isn't even released until the week after.

Truth be told, of the four major releases on my radar for December in said musical sphere, I was anticipating Spaceslug’s latest album, Memorial, the most out of any of them. This is surprising even to me, as I’d loved all three Weedpecker albums prior to their latest, and Elder’s previous record was probably my favourite record released in 2020. However, the collaborative nature of Elder’s record with Kadavar brought an unknown into the equation, whilst Weedpecker’s extensive line-up changes brought uncertainty over the direction in which they would move next. In contrast, their fellow Poles in Spaceslug have been reliably pumping out quality records across the five years since they dropped their debut Lemanis, and had made the strongest contribution to the 4-Way Split on which Weedpecker and two other Polish stoner metal bands had also featured.

Furthermore, even though 2020 saw them mix things up for their annual release in the form of the acoustic EP Leftovers and 2021 brought challenges as their equipment was damaged by a flood in their studio, the single that they released to raise funds to cover this damage, “The Event Horizon”, was just as great as everything that had come from them previously. Now, Memorial comes along to both cement them as a model of consistency and show them further pushing the boundaries of their hypnotic, melancholic stoner metal sound.

Spaceslug have always had a fairly unique sound within their scene, and on Memorial, that ‘stoner metal’ tag is feeling a bit less applicable. There’s still fuzzy guitar riffs and hazy vocals, with each shown off nicely on a song such as “Lost Undone”, but those riffs feel overshadowed by the melancholic leads and sharper tones used elsewhere in the song. Instead, Memorial follows somewhat in the vein of Eye The Tide in taking the base sound established on Lemanis and Time Travel Dilemma and seeing where they can expand it to.

On the topic of Eye The Tide, this was the album that saw the introduction of harsher vocals to Spaceslug, something that only briefly resurfaced on the following year’s Reign Of The Orion, but they are more of a presence this time around. Sometimes they’re just a brief cameo, such as midway through “Spring Through The Abyss”, but they are a central presence on the hefty “In The Hiatus Fall”. I remember thinking that these harsher vocals felt slightly out of place on Eye The Tide; maybe it’s because that album accustomed me to their presence in Spaceslug, or maybe it’s because some of the instrumentation on this record pushes heaviness in a way that they’ve not approached previously, but they feel more natural and fitting here. It helps when “In The Hiatus Fall” transitions into aggressive tremolo riffing that sounds reminiscent of bands such as Amenra. On the topic of Amenra, “Of Trees And Fire” is the furthest Spaceslug have ventured from stoner metal to date; this is almost a post-metal song, with guitar tones on the track reminding me of the likes of Amenra and Redwood Hill. It took me by surprise on first listen, but it works really well when combined with Spaceslug’s distant, floating vocals and their melancholic tones.

With these new approaches, Spaceslug not only expand the range of Memorial, but they heighten the impact of their more ‘regular’ fare. “Spring Through The Abyss” sees the sad, drifting vibes of some of their more recent songs stretched out, with the band happy to dwell in quiet meandering for several minutes at a time; when they do bring the harsher vocals and a pretty hefty stoner doom riff later in the song, the weight of these moments feels heavier than they would in a different context. Similarly, the pounding toms and brooding riffs early in “In The Hiatus Fall” act as a nice contrast to the mellow jam in the middle of this song. Even the songs without these moments feel enhanced this time around; the stoner riffs in “Follow This Land” sound really heavy, while “Memorial” goes in the opposite direction by revelling in the band’s softer, sadder side throughout to great effect.

As their compatriots in Weedpecker go in a lighter, rockier and more psychedelic direction, Spaceslug have instead driven their music into heavier territory, combining this with an increasingly emotional tone. In doing so, they’ve done an excellent job of evolving their sound while retaining what made them appealing in the first place. I’ve always thought Time Travel Dilemma would be a tough ask to beat, but Memorial may be the band’s strongest effort so far.

Written on 10.12.2021 by
musclassia
Hey chief let's talk why not
More reviews by musclassia ››