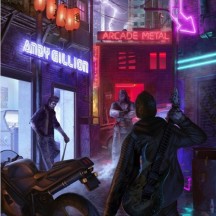 
He's a serious shredder with a wicked sense of humour. He's the architect of many a killer song and multiple musical projects but moreover a genuine guy with a positive attitude and the un-wilting will to entertain. He is Sir Andy Gillion, and anything that Sir Andy Gillion engineers garners serious attention. For I know it will either be ground-breaking, entertaining to the max and/or hilariously funny. Hence the on-the-spot bestowed knighthood. The Queen is busy but she will get to it eventually. I am only here to speed things up.

Andy is most definitely one of those musicians who define what being an artist as all about. The dude is also a huge gamer and has done plenty already in terms of video game scores and other contributions. Arcade Metal is in a way a natural evolution of that, with yet again a contagious positive vibe and an oversize pinch of excitement, which you could call a fistful of excitement to be more precise. Perhaps even a gauntlet of it.

"Instrumental" can be such an intimidating word, for it sometimes evokes a level of technical self-focus that can destroy an album atmosphere. Plus, so many people connect instantly with vocals. There is none of that here, for Arcade Metal is unpretentious and direct in its approach to entertain us. It is spelling out its purpose from note one and never aspires to be something other than. A simple approach, which is what we need in those days of unnecessary complications of all kinds. If you have had a chance to enjoy his first solo album NeverAfter, this is the same brilliant formula of directness.

Arcade Metal, the title says it all. That beloved Japanese video game universe from decades ago (80s/90s), mixed in with modern shredding with quality guests such as Jeff Loomis, Matt Heafy and Paul Wardingham is just too damn fun to pass up. The way the retro video game sound is coming across is downright amazing. There is even a contribution by legendary game composer Yuzo Koshiro on synths. So if you still have visuals in your mind to this day about Street Fighter, Final Fight, Double Dragon, Streets of Rage or any other over-the-top beat 'em up game that still represents an area of simplicity that has since petered out, this album is a must-listen.

For the next edition - for surely this will come to pass - we just need to guest star Sensei Marty Friedman, Sigh's Mirai Kawashima, and Concerto Moon's Norifumi Shima. Then the world will be as one, on Arcade Metal II. At least it would permanently destroy the Japanese charts.

Anyway, by all accounts Arcade Metal is a retro gem wrapped in a modern experience. If you are familiar with neo-wave bands such as Scandroid and Dance With The Dead, it is that sort of atmosphere - and artwork - with out-of-this-world guitar shredding as a cherry on top.

Now, I just have an urge to break out my SNES and Neo Geo consoles and kick some serious ass in simulating street fighting somewhere in downtown retro Tokyo. Here I come baddies, oh yeah. But wait, wasn't the MegaDrive the more immersive experience of them all? Good times.

You can already check out the ode to Castlevania that is "Enter The Castle" for a tasty shred-tastic preview. Please support the band on tour if you can, this sounds like a solid monolith of unrelenting entertaining fun.

Disclaimer: Copyrights of game names are all copyrighted by whomever has them, I am too lazy/busy to do that kind of research.

Written on 23.08.2022 by
Dream Taster
Bringing you reviews of quality music and interesting questions such as: