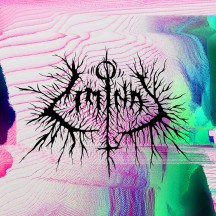 I first got to know Petbrick because of the collaborative set they did with Deafkids at 2019's Roadburn, and even though I attended the festival, I missed that specific set. Thankfully, that did make the transition from the live stage to a record in the form of 2020's Deafbrick (review here). And even though I did listen to Petbrick's proper solo and only other record, I felt like they're the kind of band that really thrives in the collaborative mode of working. In that regards, I'm relieved to say that Liminal works in both Petbrick's blazing solo sound and their collaborative nature all in one place.

A lot of what works in Petbrick's music is how the emphasis on the percussion, courtesy of drummer Igor Cavalera (I can't believe I got this far in the review before mentioning his involvement), gives the album such a rhythmic nature, one that goes very well with the already rhythmic nature of the synths. Though this fast-paced repetition is not overextended throughout the record, it oozes of a very primal energy that is not usually associated with the very artificial sound of the synths. This being a pretty guitar-free record, a lot of its heaviness and metal appeal (aside from the Cavalera connection) comes from how aggressive and noisy this combination is, especially when you also take into account the hypnotically harsh processed vocals.

It does make a lot of sense why Petbrick have collaborated with Deafkids, both having pursued the very psychedelic nature of harsh percussive music, even if Petbrick take a more electronic approach, complete with some breakbeat sections and even some moodier slower post-industrial sections to offer a nice dose of variation in pace and sounds. And here's where Petbrick's collaborative nature comes into play. While I already featured a lot of guests, even on the same number of songs, it feels like Liminal ups the ante a bit by being simultaneously fitting and challenging with its features, with the hardcore of Converge's Jacob Bannon, the weird hip-hop of Lord Goat and Truck Jewelz, and the dark folk of Neurosis/Harvestman's Steve Von Till all somehow melding into the barrage of synths and percussion, though the latter obviously adapting in pace and sound.

I do hope Petbrick continue to find challenging artists to collaborate with and keep pushing how far their sound can go, whether as features or full collaborations, but Liminal also did get me more invested in what Petbrick can do by themselves.