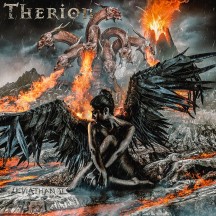 
I double-check their discography, and sure as rain, Leviathan II is no less than Therion’s 18th full-length studio album. You will not find anything truly new here, but it is greatly more varied than its predecessor, and probably the band’s most memorable album in over a decade.

Now, I cannot say that Therion’s output as of late has been all that relevant to me, but this is a band to which I have a long-standing personal connection. It was one of the very first bands I fell in love with as a young teenager, having recently discovered metal by way of Nightwish’s Oceanborn, and I have spent countless hours listening to every album released before 2010. Hell, even my username is one I have used on various sites since my teens after appropriating it from the song “Up To Netzach” from A’arab Zaraq Lucid Dreaming (not so much because it is a great song and album, because, nah). Thus, I felt the need to appoint myself for reviewing their latest effort, with a fair share of trepidation associated to the task. This trepidation mainly stems from the fact that I have not truly enjoyed a Therion album since the excellent prog opus Gothic Kabbalah, which by now is (counting the years in my head)... wow, 16 years ago? Damn, that is old. Damn, Therion is old. Damn, I am old.

Enter the 2020s, then, to find a band finding its way back halfway through to its roots. As pointed out by Radu in his review, “With Leviathan, Therion give you exactly what you want.” While that was certainly the band’s mentality in the making of Leviathan II’s predecessor, Therion certainly did not give me what I want from a Therion album in 2021; being a hit parade of songs all veering into symphonic pop territory resulting in an album full of tunes so equally memorable that to this day I still can only remember the best one of them, namely “Tuonela”. My hopes were kindled slightly after reading an interview with Christofer where he says that Leviathan II would be more “dark and melancholic”, with more experimental and progressive songs, and compared it to 1998s high-water mark Vovin.

So, how does Leviathan II compare to my expectations? For starters, the much more varied songwriting and, I feel, more natural performances on display here meant I needed only half a play through to decide in favour of this album over its predecessor. It starts out with the 2½-minute short, but sweet, “Aeon Of Maat” (referring to the Egyptian goddess of truth, balance and justice). There is an airy sparseness to the instrumentation which adds a certain bounce to the layered interplay of Thomas Vikström’s tenor and Lori Lewis’ soprano, and while it is grandiose and memorable, I would hesitate to say it opts for “catchy”, instead moving quickly through its motions and ending in a blistering guitar solo by Christian Vidal.

“Litany Of The Fallen” is the latest of Therion’s many odes to Satan, and reminds me of the fact that this is still the band whose main lyricist used to be Thomas Karlsson, founder of the occult Swedish left-hand-path organisation Dragon Rouge. It is one of the singles released ahead of the full album, and one of the songs most similar to Leviathan. It is here it becomes apparent that the main fault of said predecessor was not so much the quality of the music itself, but the fact that it was a collection of songs that all fought for the same spot in your memory: that of the album’s top hit. While “Alchemy Of The Soul” follows up with another catchy number, it goes through more progressive sections, and about midway through the lush power ballad “Lunar Coloured Fields”, I find “Litany Of The Fallen” still fresh in memory rather than any of its impact having been taken away by following songs, as they all deliver a variety of impressions that nestle snugly beside, rather than on top of, each other in my memory.

Next follow two lukewarm songs about the prime minister of Hell and the fiery origins of djinns, respectively, and then another pseudo-progressive power ballad where any momentum in the tracklist meets a bitter end. Luckily, “Midnight Star” remedies this with a hard-rocking riff and Lori’s intense performance in the verses trading place with a high-octave, albeit slightly uninspired, chorus by Vikström in the “Beauty and the Beast” fashion Therion pioneered in the 90s and helped become a mainstay of gothic and symphonic metal alike. “Codex Gigas” is another memorable, epic arena rocker which makes it clear to me that the best parts of Leviathan II are the rocking, riffing, catchy cuts - but this only thanks to much of the tracklist not being deliberate hit songs, instead consisting of progressive and classical mid-paced pieces replete with lots and lots of layered operatic trickery.

All in all, Leviathan II is much more memorable than its predecessor, mostly thanks to literally every song not being equally memorable; the greater variety in compositional approach and dynamic tracklisting resulting in a very decent album. The one problem with Leviathan that persists is a slightly flat production that does not offer enough room for all the orchestrations and sometimes puts too much focus on the vocals, to the point that the instrumentation drowns behind them. There is something to say about the lack of innovation, but as the 2010s showed, innovation is not necessarily a good thing for this band (any more).

The result of more varied songwriting and lusher execution makes Leviathan II an enjoyable, albeit unsurprising listen, and it is at least on par with Sitra Ahra, which makes it the best Therion album in over a decade. Still, it is a far shot from Vovin, Secret Of The Runes, or Gothic Kabbalah, but by the 18th album in a band’s career I think we can accept the stellar performances and decent music in all its predictable glory, no?