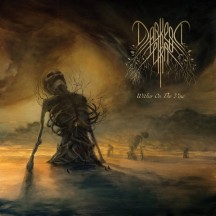 
Wither On The Vine is the third full-length release by the Northern Irish doom metal band Darkest Era, and as it happens, this is only their first release in over eight years. So, has the enduring wait after those lengthy eight years actually been worth it? Well I'm sure you will be pleased to know that the answer from me is a strong and definite yes, it's certainly been well worth the wait; I mean, this could even well be a deserving contender for AOTY in my eyes.

So eight years have passed since Darkest Era presented us with their album Severance, and Wither On The Vine continues very much with the same trend with which the band left off, with powerful and emotive songwriting and epic doom structures, along with a unique blend of genres and mixed styles varying from Irish folk to traditional doom and blackened heavy metal. All of these were to some degree also present on their previous efforts; however, Wither On The Vine is somewhat lighter and much more melancholic at times than its predecessors. Nevertheless, I should add that it's still undeniably powerful, as they once again manage to create that deep dark sorrowful atmosphere rich in enchanting melodies that they have become renowned for.

There's certainly a number of fascinating influences behind this impressive structure, in which you will hear certain aspects from bands such as Ereb Altor, Winterfylleth, Katatonia and even Iron Maiden. Still, one of the main influences is undoubtedly from their Southern Irish neighbours Primordial, particularly on the tracks "Collapse" and the opener "One Thousand Years Of Night", with those great galloping riffs, blackened guitar sounds and Irish folk melodies. If that isn't enough, then just listen to those passionate and emotional vocals by Krum, as clearly the sound has a very strong resemblance to Primordial’s Nemtheanga; that is, until his vocals hover into doom mode, at which point he differentiates into a much more despaired and sorrowful style, sounding much like that of Aaron Stainthorpe from My Dying Bride.

While I must say I'm impressed overall with what Darkest Era have achieved here, there are still several moments on this album that really stood out for me above all. First of these is the song "Collapse" and its various styles, including doom, heavy metal and folk; it's like listening to a combination of the aforementioned Katatonia, Iron Maiden and Primordial. Secondly, the song "With Tragedy In Our Blood", for me, is the catchiest and most memorable song on the album, mainly due to the strong traditional heavy metal influence underlying its riffs and catchy songwriting, which again to me scream out "Iron Maiden".

If there's one thing for sure, it's that Wither On The Vine is certainly not like any other doom metal album you'll hear this year, not in the slightest in fact, and with the intriguing multiple genre infusions and blending of styles never ceasing to amaze, it certainly will be one of the most memorable albums come the end of the year.