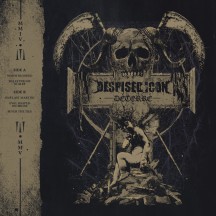 While Despised Icon's fortunes may have waned somewhat with 2019's unremarkable Purgatory and the rise of a new breed of bands and sounds within the expanding deathcore genre, it bears reminding how earth-shattering Despised Icon once were. While the band work on new music with the aim of releasing it next year, they throw the fans a bone with Déterré, a five-track cut of some early demos from the band's formative years that gives fans an insight into their sound during this embryonic stage in their growth.

This rough and ready collection of tracks belies its B-side odds and sods nature, as Déterré stands tall on its own merits. Sure, they are unlikely to make any 'best of' playlists, but for songs that were left off main releases, it's a stronger release than you would otherwise assume.

"One Last Martini" combines all the elements that gave early deathcore its charm, from the slam-esque sound of the snare drum to the frantic guitars, and of course, the obligatory breakdown. "Oval Shaped Incisions" sounds like The Dillinger Escape Plan if they decided to give deathcore a go, while "Warm Blooded" is evidence of why Despised Icon took off the way they did.

As a bunch of early demos, Déterré's tracks do lack some of the spark you would expect, but that comes from these tracks being prototypes from 2004. "Bulletproof Scales" does seem somewhat bland when viewed from the eyes of 2022, but hey, hindsight is...20/20 *shudder*

While Déterré may only generate a few ripples in the water while bands like Lorna Shore and Enterprise Earth are busy making splashes in 2022, it tees up Despised Icon to make a hero's welcome in 2023, should any new album stick to schedule.