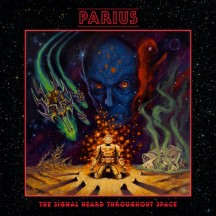 
Considering the difficulties of hearing sound in space, one might wonder whether The Signal Heard Throughout Space is an ambient album; instead, it’s the latest record to send the prog fansphere into raptures.

Parius’s previous album, The Eldritch Realm, was enthusiastically reviewed by one of my colleagues back in the days that he still included scores with his reviews, and found similarly positive reactions elsewhere. My memories of it are faint, but my helpful habit of making annual lists in which I cover everything I listen to with notes has shown me that I felt mildly positive about its mix of melodically inclined extreme metal and Between The Buried And Me-style prog; four years later, those extreme elements have very much moved to the background, with the Philadelphians going full prog opera.

If you’re looking for reference points for this new incarnation of Parius, Between The Buried And Me still remains a very relevant one, particularly their own rock opera-flirting album Coma Ecliptic. Beyond that, many reviews have mentioned Haken, which I can hear in portions later on in the tracklist, while I personally pick up The Dear Hunter in several instances, at least vocally, along with what must be at least a moderate degree of appreciation for Devin Townsend and his Ziltoid records. That’s a lot of very popular prog bands being brought into the mix, and given the already solid level of appreciation fans had for Parius, it’s perhaps unsurprising to come across various proclamations of The Signal Heard Throughout Space as Album Of The Year material on prog forums; as it is, I’ve come to like the album more with repeat listens, but I remain slightly unconvinced.

This opera is set amongst the stars; as if the title mentioning ‘space’ didn’t make that clear enough, an opening track called “Spacelog.0245” with a sci-fi spoken word diatribe would really help to seal the deal. This opening cut, lacking vocals outside of that spoken word, bears similarities to instrumental cuts from previous Dream Theater concept records, mixing up convoluted instrumental segments along with more bombastic portions. When the vocals do enter on “The Signal”, I perhaps recognize one of the sources of my ambivalence. Both placed surprisingly low in the mix and not quite clicking with me tonally, Louis Thierry doesn’t quite resonate with me as strongly or as frequently as he perhaps should, given the generally solid standard of the vocal melodies he’s bringing to life (the ‘bridge’, for lack of a better word, in the last minute or two of this song is the first of several sections that would have sounded effortlessly effective if coming from the mouth of The Dear Hunter’s Casey Crescenzo). As mentioned above, the extreme elements are a minor presence this time around, but when harsher vocals do make an appearance, they feel more natural.

Clocking in at an hour, The Signal Heard Throughout Space is over twice the length of its predecessor, and it has two songs that between them constitute over a third of that runtime. The first of these, “The Acid Lakes Of Ganymede”, is something of a turning point for the album. Not only does it feature the first meaningful moments of extremity, but it’s the song on which I find myself starting to warm to the record on playthroughs; a crucial passage for me starts pretty much exactly halfway through, with an ominous riff and syncopated vocal pattern that gives me major 2010s Between The Buried And Me vibes. I’m still not entirely convinced by the flow of this frequently shifting epic, but the constituent sections generally click well, and from this point onwards The Signal Heard Throughout Space mostly has me on board. The one glaring exception to this is “Contact!”, a song that, more than any other, must have owed something to Devin Townsend (not least through the used of the Addicted! exclamation point); the desert rock-meets-Heavy Devy wackiness approach of this song really doesn’t work for me, nor does Thierry’s vocal style in the verses.

As much as I’m a huge prog fan, there’s been more than a few prog-metal releases in the past decade that have received adulation, and for which I find myself recognizing the appeal without really finding myself all that taken in. This new Parius album fits nicely next to the last couple of Wilderun albums and the sole Native Construct record in this category; I’m not surprised that it’s gone down so well, nor do I have any major issues with it, but there’s not quite enough here that makes the kind of impact that I would hope for when setting it against albums by the bands that it’s inspired by. Still, prog concept fans who appreciate a more technical, classically-minded approach will likely find listening to this to be a very fruitful endeavour.

Written on 09.11.2022 by
musclassia
Hey chief let's talk why not
More reviews by musclassia ››