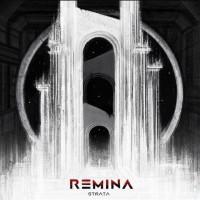 
Strata is the debut release by newly formed New Zealand-based doom metal act Remina, featuring no other than the queen of gothic doom herself, Heike Langhans, former vocalist of the mighty Draconian. Working alongside the beautiful, ghostly presence of Heike is the talented multi-instrumentalist Mike Lamb of atmospheric black metal band Sojourner. I must say, it already sounds very appealing with this duo pulling the strings; a band with huge potential, perhaps?

Appropriately described as atmospheric doom, Remina creates an all-impressive and immersive cosmic, dreamy backdrop, whilst also bringing gothic, and even some darkwave elements to the table. Heike's vocal performance is certainly well worth taking note of; it's stunningly powerful, is as hypnotic and angelic as ever. Just as you'd expect from a post-Draconian album, Heike's lyrics are both profound and poetic, but being the talented lyricist she is, there is also a focus on various sci-fi inspirations which are centred around the whole cosmic theme and atmospheric setting of the album. Now, there's also no denying the fact that Mike Lamb's instrumental work, and use of synthesisers, hold the key to creating that spacey atmospheric soundscape so efficiently.

However, unlike Draconian and the like, you can plainly see this band have developed a style which uses far less emphasis on the heavier approach to doom, meaning less of those crushing, memorable riffs, and less heavily distorted guitar driven sounds, rather opting for a soft, spacey atmospheric setting, in which you as the listener can deeply immerse yourself in. A prime example of this is the closing track "Back In Time", which is primarily a synth-based track with hardly any instrumental work at all until near the end. "Icarus Signal" is most likely the heaviest track on the album, with "Dying Sun" not being far behind, this due to the synths being held back that little bit more, allowing the riffs to shine through. So, a slightly heavier sound seems to be present on those particular tracks, but it's the track "The Endless City" which I find most appealing, with its emotive songwriting and epic structural arrangements.

The album follows a relatively simple structure, relying heavily on the synths to provide much of the album's emotion. There’s also a gentle, calming flow from beginning to end, with no actual headbanging moments to speak of, and no harsh vocals present, as Heike's wonderfully performed, and unique vocal style carries on through the album. All of this can be a joy to follow for the listener, that is depending on the listener's particular mood and tolerance level at the time, because like I said, this isn't regular doom as you know, it generally needs time to sink in, and hopefully learn to fully appreciate.

To some, this style may at first seem a bit of a miss. You might not take an instant liking to this approach straight away, and unsurprisingly so; I mean, at the end of the day this is far from your typical death/doom, gothic doom or even any kind of traditional doom for that matter. Sure, the guitars may sound thin, and the programmed drumming may obviously lack that overall punch, but if you just take a step back and listen you might actually be pleasantly surprised by what you hear.