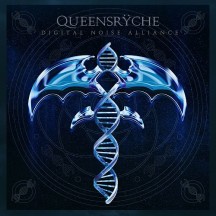 
What's in your DNA? Digital Noise Alliance apparently is in Queensrÿche's DNA. My take on it would have been "Do Not Assume" as this "new" lineup is capable of way more than you think. Do I even? Come on, you must be aware be now that the two icons who were Geoff Tate and Chris DeGarmo are long gone. Now, Eddie Jackson (bass) and Michael Wilton (guitars) are still there; and with the return of Mike Stone (guitars) to the lineup, the vista of Todd La Torre (vocals) and the newly-added skills and grit of Casey Grillo (drums, ex-Kamelot), this is a mighty impressive lineup. Casey must be a long-time fan as his rendition is flawless in style.

This is primarily a progressive rock album, often overlapping with radio rock. You know, the typical and enjoyable Queensrÿche that is instantly recognizable. The first two tracks, "In Extremis" and "Chapters", both encapsulate exactly that. They set up D.N.A. rather well - like building blocks you could say - establishing and cementing the expected style to perfection.

But while Queensrÿche's sound has been pure and unencumbered for decades, the way they always manage to wove creative patterns into melodies has been their force and trademark. Songs such as "Lost In Sorrow" and "Behind The Walls" do stand out for that reason. And to be honest, this ability is the main reason with this band is still relevant and interesting today. Songwriting wins the day.

"Nocturnal Light" and "Out Of The Black" make the album for me. The former brings out the rhythm section to the forefront while building a laid-back yet captivating atmosphere. The latter pushes boundaries with an ingenious mix of incisive progressive rock and unexpected pop rock. Not to mention that Todd delivers impressive performances on both songs (I mean, he does so on the whole album, but even more so here).

In an effort to carry on with the guitar tone of yore, some dissonant guitars sometimes take away from the punch of a couple of songs at first listen. And the album features the expected pop rock ballad that would have been made for radio stations if this were 1995. Nevertheless, the final tracks are full of power and finesse, with "Realms" being the most Operation Mindcrime-sounding and culminating with the most progressive "Tormentum". That level of energy could only be matched by a true-to-form yet Queensrÿche-ed cover of Billy Idol's "Rebel Yell", which I have to admit is a nice touch, even though it concluding the album is a bit of an odd choice in terms of song flow.

At the end of the day, D.N.A. feels more like reconstituted DNA a la Jurassic Park. The result might not be the real thing from an ancient past, but it is more than lifelike, and it is very much real and immersive. The Verdict was a thoroughly enjoyable effort, and this one is no different in that aspect. Perhaps it does feature less oomph and more depth. Regardless, despite its few perceived shortcomings, the album rolls along smoothly. Helped along with the right amount of throwback sound and the perfect dose of creativity, D.N.A. makes for an entertaining listen, for both its retro value and its novelty. After 40+ years of making music, way to go Queensrÿche.

Written on 20.11.2022 by
Dream Taster
Bringing you reviews of quality music and interesting questions such as: