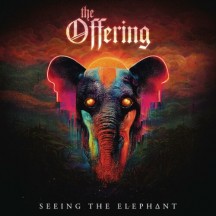 
What if you took radio rock but made it mind-bogglingly intense?

Back when I reviewed The Offering's debut, 2019's Home, I also opened the review up with a similar conceptual question. I'm afraid I'll have to come up with another schtick if I'm still the one reviewing their whenever-to-come follow-up. But there's something about The Offering that makes these summations extremely fitting for them. Not only could you have an endless mix of bands to quote or of styles and descriptors to use, but none of them would be all-encompassing enough to be "the final The Offering writeup". Reading my review again, at the risk of sounding self-congratulatory, I already made quite a big point on how diverse the mix of styles that the band plays with is. Now, on a sophomore, it's hard not to make the exact same point again.

And what seems to set the two existing The Offering albums apart is that now I have a reference for what a The Offering album can sound like. Previously I had to namedrop Slipknot or Nevermore or Judas Priest, but now, even if all of these still immediately come to mind when listening to Seeing the Elephant, there's no other band out there that sounds like The Offering, so instead they're the first name to come to mind when listening to their music. Crazy, right? That comes together with the sound being a little less all over the place, and a bit more focused on a more intense and progressive version of groovy nu metal, cutting away a bit of the thrash and power that was still prevalent in Home.

But while The Offering are a much more interesting and intense take on some older sounds, those older sounds still serve as the basis of Seeing The Elephant, and all of these radio-rock-adjacent styles of metal are ones that still carry some cheesy baggage of that very specific mainstream angst, further exacerbated by some increase focus on these sounds instead of the more reputable power thrash leanings, a blending of sounds that can come across as messy, and some very unsubtle political lyricism. So right out of the gate, The Offering might not be the band for most people, making it a potentially worse pill to swallow than Home, but they're very upfront about who they are, genre and lyrics-wise. So for the ones that were already won over by Home (hint: me), Seeing The Elephant is exciting, diverse, bold, and full of chugs.

I don't have to give the usual gateway band "might get mainsteam listeners into 'actual' metal" apologia, because in an ideal world, the mainstead would've been all over The Offering already.

Written on 29.11.2022 by
RaduP
Doesn't matter that much to me if you agree with me, as long as you checked the album out.
More reviews by RaduP ››