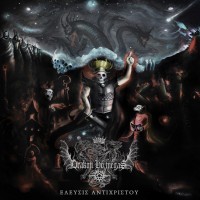 
Describing Έλευσις Αντίχριστου as epic would simply be an understatement.

Hellenic black metal fans, you could well be in for a treat here, as the newly formed Greek black metallers Drakon Ho Megas present to you their highly melodic and powerfully symphonic second release Έλευσις Αντίχριστου, and just as I've said before and will say again, the Greeks sure know what they're doing when it comes to creating top-quality black metal. Their take on the extreme genre is certainly no joke, as they're responsible for introducing the infamous Hellenic black metal scene to us at the beginning of the 90s, a time when black metal was fresh to the world.

Years later, I can honestly say the scene is still going strong; obviously the Hellenic scene may never again reach the glorious heights of its early days, but there are some real treasures still to be found, and you needn't look long and hard, as Drakon Ho Megas could well be one of those modern day treasures. It has all the traditional Hellenic elements and then some. Two years have passed since Drakon Ho Megas released their self-titled debut, which was a solid enough effort all round; this time around, they have really cranked it up a notch, releasing something a little more extraordinary with Έλευσις Αντίχριστου.

Consisting of Apostate Archangel (guitars, synths), Babis Lainis/Lord Nero (vocals) and Mars Triumph (bass, choir vocals), Drakon Ho Megas heavily focused their attention towards symphonics whilst keeping the use of traditional melodic riffing; this along with thick multi-layered instrumentation creates an overwhelming epic soundscape. The melodies are undeniably rich; however, there's nothing outstanding about them. The riffs aren't quite as memorable as what we heard from early Rotting Christ for example, but they are accompanied by some fine lead guitar work, with "Η Έσχατη Μάχη (Αρμαγεδδών)" ("Ultimate Battle") containing the most impressive solo of all. What really does stand out most for me, though, is the incredible bass work, as it unusually shines above all other instruments. Mars Triumph's outstanding basswork displays can be heard throughout each track, but especially on a song such as "Η Συναγωγή Του Σατανά" ("The Synagogue Of Satan"), which places the emphasis on his bass lines all the more.

The vocals I have to say are decent, albeit nothing remarkable; however, I wouldn't expect as much, this being Hellenic black metal and all. Sakis Tolis will perhaps be a fair comparison to Babis Lainis/Lord Nero's vocal style in this instance, with the exception of his bellowing cry outs on "Η Συναγωγή Του Σατανά", a track which also includes a spoken word/priest-like chant, a vocal style also included on the strikingly melodic and epic track "Αβαδδών (Ο Άγγελος Της Αβύσσου)" ("Abaddon (The Angel Of The Abyss)". As far as lyrics are concerned, without a grasp of the Greek language, I have to rely on translations; however, as my main focus on an album isn't usually the lyrical content but the music itself, this is not a major issue.

To quickly summarise, it's early stages for the newly formed Hellenic band Drakon Ho Megas, a band still finding their roots in this vast and ever-growing underground world of black metal, but by carrying on with their modern symphonic formula mixed with the traditional Hellenic sound, they could be well on their way to becoming a winner.