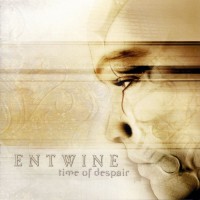 
Entwine started their musical career almost 10 years ago in 1995, back in the days they used to play Death Metal, and a couple of years later they decided to turn towards Gothic Metal, since as a Death Metal outfit, they gained little attention.
Things began to look well for Entwine when they hired Mika Tauriainen, replacing former vocalist P.William, their sophomore album "Gone" and the single "New Dawn" caught the attention of the media in general.

This "Time Of Despair" is their third album so far, and seems they made it this time, because, Time Of Despair is one of the best Gothic Metal albums I've heard in a very long time, the sad themes and the melancholic lyrics of love and loss are unmatchable.
While some people will find this album too mainstream and less Metal, don't be fooled, this album has a Metal edge indeed, but is the melancholic part what attracts me.

The album opens with "Stream Life" a fast paced and catchy song, followed by "The Pit" the first single of the album, this track contains danceable electronic elements in the first seconds of song, this one has a great chorus too.
"Nothing Left To Say" lowers the revolutions a little, and bring us a sad mid-paced gloomy song, I must say that the vocal delivery of Tauriainen shines in this song, things remain calmed when "Safe In A Dream" arrives, another slow song, filled with sorrowful feelings.
More electronic elements and beats in the firsts moments of "Falling Apart" , while "Until The End" is perhaps the gloomiest song in all the album, this one is a duet between Tauriainen and female singer Saara Hellstrom, the result is amazing, pure sorrow my friends.
Things go up a little with "Lear To Let Go" a song that has been on my mind for weeks, is impossible not sing it, the album wraps with the title track "Time Of Despair" another fantastic slow song, a poem of distress combined with grieving vocals and woeful guitars.
And don't forget, that if you bought the limited edition, you got an extra song "Tonight" and a cover song of Kiss, "Tears Are Falling".

No Cd in my collection puts me as sad like this one, I don't know why, I don't know if it's the vocals, the guitars, the keyboards or the lyrics, there is just something about this record that makes me sad, and that's a good thing, there aren't much of those in my collection, there are some that tried, but failed miserably, Entwine takes the basic formula of Finnish Gothic Metal and adds a extra pinch of sorrow in the mix, the result, an exquisite buffet of grief.
Written by Undercraft | 00.00.0000