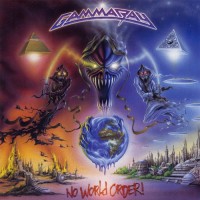 
I must say it is very difficult to write a review for this album - listening to it takes my mind off the task of writing the review. No World Order came out in 2001 and was projected to have a high success especially after the grand zenith Powerplant achieved in 1999 by selling more than 200 000 records worldwide. The group line-up has remained the same (after a series of unstable changes in the 90s) for this album, and let's hope it has finally stabilized for good. No World Order is a conceptual album about freedom; it is rich in solos, catchy riffs and powerful choruses, and of course has the hallmark of quality of every German power metal band.

No World Order starts with an epic introduction about the Illuminati (religious groups regarding themselves to be under enlightenment). The album is generally opposed to the Illuminati and their control: the almighty chorus accompanied with powerful drums serves as an introduction to what's going to follow in the rest of the album - a raging battle complemented by some ultra-fast melodic metal and Kai's piercing voice.

Dethrone Tyranny's catchy melodic riffs and plethora of rhyming lyrics is a call which pleads to how miserable life is under a tyranny of slavery and deprivation of freedom and paradise. Dethrone this tyranny, free us from the paranoia, free us from this pain. Lead us straight into the heart of the unicorn.

Kai doesn't miss a chance to strike a solo in the next track from the album, called The Heart of the Unicorn, however the aggressiveness of this song gives it a more thrash-like approach in contrast to the rest of No World Order. Additionally, Hansen's high-pitched voice strongly resembles that of Halford's in Painkiller.

Gamma Ray obviously have an intention to outshine Helloween, because the next track on the CD, Heaven or Hell, is the definite I want out rival. Both songs start similarly with a low voice which gradually increases to the chorus - a stout shout. Heaven or Hell is very melodic song, and its speed is relatively slower compared to the other songs, which implies it was intended for a single (although Eagle ultimately became the single). The song slightly drifts from the concept of freedom although it still pertains to the fact that freedom could be somewhat found in either heaven or hell.

Strangely, there is no song by the title No World Order. Instead, Gamma Ray gives us New World Order - a song that contrasts the whole album and shifts into the position of the Illuminati, the power they have and the fate that awaits us all. It is especially a contrast to the lyrics in Dethrone Tyranny, where one is running from someone in the dark - illuminati, who "In the darkness, shall await." Just as in all of Gamma Ray's songs, New World Order is abundant on catchy rhyming, powerful chorus and very fast guitar playing. This song can well serve as an example for all heavy/power metal bands.

After New World Order, a less powerful track follows: Damn the machine. The heavy start of Damn the Machine reminds me of Accept's songs but is accompanied with a double-bass drumming and strong solos. Zimmermann (drummer) who wrote the song seems to have a heavier and somewhat more gradual approach to the chorus which is mostly longer than usual and much slower.

Being the strongest power metal song on Gamma Ray's No World Order, Solid has got everything the album can offer. It starts classically like a power metal song (in contrast to Damn the Machine) - boiling drumming, screaming guitars, abundance of solos and a great build up to an outstanding chorus. If it were up to me, I'd name the album We Are Solid. Its lyrical content doesn't fall behind either - Kai Hansen is a rhyming magician, he is able have a rhyming content in the exact right words related to the concept of the album - the extinction of tyranny on our planet (represented by the menacing interstellar aliens in the song).

The flames in hell are burning and the body counts are rising. Prepare for the Fire Below! This is a song which sounds more like a heavy metal song from the 80s. The rhythm of the song is reminds me of Judas Preist's Metal Gods only that there are a few more solos scattered here and there and it is faster.

Another central point of the album is Follow Me. Again, extremely melodic with a fresh keyboard start, this song is a symbol of unity and a blend of beckoning lyrics supported by Kai's own chorus which is a slight deviation from the rest of the songs. Although there are parts where all the band members sing, they are not designated as the chorus. Richter (guitarist) gave this song a more solo approach for Hansen.

Selected as the single of No World Order, Eagle is a good competitor to Solid, it only selects a more heavy approach (with a spaceship departing in the video clip) and it fits excellently as a headbanger song. The idea of the eagle who flies free in the skies revolves at some point in almost all of the songs in the album and Kai Hansen says it all in different light. The melodiousness of the song makes it perfect for a single, yet it is nearly 6 minutes long.

There is a ballad in the album under the name of Lake of Tears. Unfortunately it is nothing supreme and I think is the setback for a full-scale power metal experience. Lake of Tears is rather something experimental for Gamma Ray, none of their older songs sound alike it. All albums (except in Japan) have this song as a closing. For the Japanese fans, Gamma Ray added a bonus track called Trouble. This is the song that should have replaced Lake of Tears. The song is very dynamic and shifts from fast to slow and vice versa (a bit like a short version of Heading for Tomorrow). Trouble is fast-paced song with a lot of spirit and can cheer you up quickly.

All in all, it is evident that Gamma Ray has put a lot of thought and effort into this album (Kai Hansen said that Gamma Ray is his first priority now) and it is definitely worth buying - if you are a power metalhead then having this album is a MUST for you!
Written by Demunarath | 02.04.2004