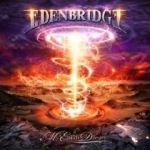 
This is the album that forever changed the way I look at Edenbridge. Over the band's previous five studio albums, I'd always enjoyed the majestic vocals of Sabine Edelsbacher and the instantly recognizable guitar work of Lanvall. However, I consistently craved a more expansive, fatter production and a heavier songwriting approach. On MyEarthDream, Edenbridge has done exactly that and more.

Not content to create symphonic metal with keyboards alone, the band enlisted The Czech Film Orchestra, whose presence is felt throughout the album. Immediately the listener is welcomed with the orchestral "The Force Within," an intro track that is better than most, as it manages to mix the grandiose and reflective emotions of past Edenbridge releases, but strongly hints at more contemplative, imperative emotions. And what a follow-up "Shadowplay" is, offering the band's heaviest guitar riff yet, something that really surprised me upon initial listens. Don't mistake me, Edenbridge has by no means left their light, angelic sound behind, but has instead created another level to a sound they've developed for a decade now.

Of course, for many longtime followers, this may not seem as exciting to hear, so your opinion on the band's direction here may differ. Lanvall does not have his skyward-reaching guitar solos as much, but instead places them strategically for dramatic impact. He has always played with a sense of relaxed confidence, but on MyEarthDream there is an urgency that the rhythm guitar parts give that was not there before. Therefore, the feelings the listener takes away are still uplifting, but now in a more intense, complex way. Some guitar work highlights are in "Fallen From Grace," where Lanvall's solo seems to personify the fall from grace itself. In "Adamantine," each riff steps into the next so smoothly, but always with a focus on a memorable melody. The changes are very efficient, and really you will not feel a wasted moment here or in the album.

Irregardless of Edenbridge's musical evolution, Sabine's vocals are as grand as ever, pouring out maturity and consistency. The orchestral arrangements and heavier production give her a newfound identity, offering a dynamic contrast with her voice now. The album's promotional photos show Sabine in classic pose, with her arm outstretched and her palm facing skyward, and longtime and new fans I think will agree that it's an accurate representation for the emotions Sabine expresses here.

I have a few minor issues with the album. First, because of the heavier production and songwriting, I think the song "Whale Rider" really feels out of place now. A fine ballad by itself, but after repeated listens, it became the track I enjoyed least because it feels like a song from an earlier release, not for this one. The second is that at times there is too much choir beneath Sabine's vocals. I love when the choir acts as a second vocalist, singing different lyrics, but when they are together, it drowns out Sabine's strength. She sounds best alone to me.

Of course, these are small complaints, or maybe personal taste. I think Edenbridge has given us one of the strongest symphonic metal albums of 2008. I will not say they have created something new here, but instead redefine themselves and what symphonic metal is all about. Lanvall's strong production and songwriting together with a perfect mix of Karl Groom (of Threshold) challenge old fans to embrace the new sound, and offer those who've overlooked the band a reason give them a second look.

Written on 09.01.2009 by
Jason W.
Music and the written word are two of my passions in life, so I figured, why not combine the two?