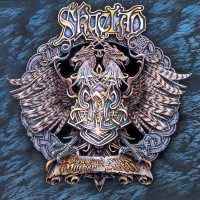 
The first Skyclad album, one of the pioneers of the style called Folk Metal were not so folky at the beginning, as a matter of fact, is hard to know is the same band that we love and enjoy, but this record has more that ten years old, and things tend to change after that much time.

Even if this album is not the Skyclad we know, is really good, here we get a glimpse of the heavier, thrashier roots of the band. Songs are really heavy and loud, build under a wall off Thrash riffs and aggressive vocals. From the opener "The Sky Beneath My Feet" I was shocked to hear this kind of heaviness here, I was expecting more happy creatures and wood people, instead I got angry warriors with swords and chain mails. Other fine example of this could be my favorite song in the album, "Our Dying Island", a fast paced song with catchy hooks all over and great melodic aggression in every single note. God I love the raspy vocals of Martin Walkyier.

The only real Folk Metal song in the record is "The Widdershins Jig" song that employs violins and tin whistles, a original element if you consider that this was released back in 1991, I bet many people were shocked back then to hear those kind of elements in Metal.

The question that pops up now is, Did Skyclad invented Folk Metal? And if not... how many bands had the creativity and balls to use this kind of elements in their songs? I don't know any, maybe you know? If you do, please tell me.

A heavier Skyclad, much more dense and less folky, that's what you're gonna get when you purchase this, a damn fine record from a band that was about to create a whole new genre that ten years later would become very popular.
Written by Undercraft | 07.10.2004