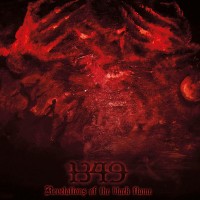 
I think that everyone who is familiar with the playing style of the Norwegian black metal act 1349 will be, mildly speaking, shocked after hearing their newest release entitled Revelation of The Black Flame. If you worship the insane speed of their previous releases, or their ability to capture the very essence of chaos and turn it into music, you are going to look at this album with disgust. You don't need to read any further, for you, this album is utter crap. However, if you are looking for something that doesn't need to have 2543 BPM drumming to capture your attention, read further...

The intro of the first track, "Invocation", is something unlike anything I've heard before. It begins with a terrible tortured scream of what seems to be a man in true agony. Then, more screams join, each more terrible and painful than the last. And as this orchestra of unimaginable agony reaches it's peak, the screams slowly fade away only to get replaced with the sound of guitars, blasting through that horrible noise. This intro should give you a good idea what to expect in the release. This release isn't about insanely fast, stylish riffs and top-notch drumming. Instead, this release was intended to give you the idea of what's it like to endure an eternity in the most feared place of all times, a place called Hell...

I do belive that this release is going to split the opinion of people right in two. Those who hate this far more ambiental approach (or rather, fans of the earlier albums) will call this album "awful", "a betrayal of the previous style" or perhaps use some far more vulgar language. And there are others, who will love (or maybe just pretend to love) just that thing about the album the other group hates. For you, speed junkies, I repeat: you have very little to look for here. Riffs are slow, put no emphasis on catchyness, and lack of energy and burning hatred you would expect from 1349. Drums follow this trend, and won't feel like a thousand hammers smashing in your head like they used to. The vocals help with the new atmosphere as well, so they are also nothing like before. The only song which might interest you is "Maggot Fetus... Teeth Like Horns", and even that one sounds more like it came from one of Darkthrone's latest albums.

And now, those of you who like ambient... This album has an amazing number of 3 instrumental songs (after which I had a hard time trying to sleep at night), and a Pink Floyd cover. Ah, yes, about that cover. You really won't believe it, but 1349 managed to turn the the song of a progressive rock band into a 6 minute piece of pure ambiental terror. The sound of wind blowing through your speakers, with evil whispering vocals, and a bass slowly tearing it's way through both is something you don't want to listen to in the middle of the night, while you're alone. Trust me. Anyway, the album does manage to create an eerie, at times terrifying atmosphere with quite simple musicianship. It is present throughout the whole release, and the whole thing feels like a brief tour through Hell. It's agonizing, desolate and never-ending... Revelations of The Black Flame will make you feel all of this.

Now comes the difficult part.... the rating. Well, as mentioned many times before, the fans of the previous albums will see this one as deserving of no more than a 4.5. But, if you liked what is described in the previous paragraph, the album is worth much more, although it still lacks that something to be brilliant. As an ambiental release, it's not short of a 8.5. So, the final rating is a compromise.
Written by Slayer666 | 15.10.2009