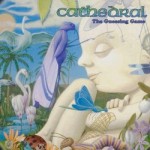 Disc II
01. One Dimensional People
02. The Casket Chasers
03. La Noche Del Buque Maldito (Aka Ghost Ship Of The Blind Dead)
04. The Running Man
05. Requiem For The Voiceless
06. Journeys Into Jade


We all know these doom pioneers have been around for over twenty years now, but for the first time Cathedral have released a double album, in the form of The Guessing Game.

The music contained on these two discs is as colourful and artistic as the cover art, Cathedral have always been a little fruity and this latest offering is no different. This is doom metal meets psychedelic rock and progressive punk, and a bunch of various other elements thrown in there for good measure. The Guessing Game isn't as crushingly heavy as the band have been in the past, but there are still plenty of riffs on this doom-a-thon to get your head behind.

The 70's would be proud, The Guessing Game smells of drugged up influence; the whole album feels foggy and intoxicated. Those unfamiliar to the band will find this just too weird. Sitting through the full album in one go is also a little draining unless you have no comprehension of time, as the band probably didn't putting this album together. The lyrics grumble along about society, religion, and such other inconveniences too, which does get a little old after the first song. The Guessing Game is an album that has gone even further into the bizarre, making it something only the band's fans will initially understand.

You can always find some songs on a double album that could have been omitted in order to save the planet's CD forests, The Guessing Game is no different, although the quality on this album is consistently good, the diversity of styles here might be the reason for either fixated or dwindling attention, however your tastes are.

Lee's vocals are as deadpan as ever, and the rest of the band make their best attempts to bring a slightly psychedelic-y doom-y soundtrack with some heavy yet slightly resigned riffing. The album sounds great, the production is spot-on.

The Guessing Game is intoxication encapsulated in musical form, this isn't your everyday doom album, it is a perplexing journey through time and space that might just leave you a little confused at the other end. Don't knock it until you've tried it though.