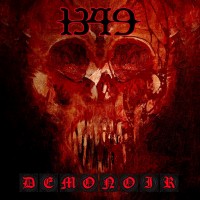 
1349 - The dark year that marked the outbreak of the Black Death all over Europe wiping out half of its population - betokens also the 14-year old struggle of a Norwegian black metal quartet in the big league. 1349 were never of Immortal or Dimmu Borgir's caliber, in fact, they probably stand at the waistline of the Norwegian black metal hierarchy. Nonetheless, two of their five full-lengths, Beyond The Apocalypse and Hellfire, sired a worldwide recognition and made 1349 not just a scorned date in human history but also the name of a highly rated Norwegian black metal outfit.

It was only two years ago following the release of their fourth and ill-received Revelations of the Black Flame that the band hurtled the ground stumbling over the edge of mediocrity and since then, the fans have been uttering prayers that their beloved band would stage a comeback. Well, keep praying, for Demonoir is not quite the "comeback" you were longing for.

Demonoir bears 13 tracks, seven of which are known as the "Tunnel of Set" series. Basically, they are very short pointless non-haunting interludes ranging from 0:39 to 03:53 and adding absolutely nothing to the album, except nerve soreness and perpetual boredom. The barely acoustic and briefly eldritch "Tunnel of Set XIII" is probably the best and least annoying of the ambient series, it could actually serve as a steering rudder to wind up the rainy ending of Agathodaimon's "Yesterday's Reprise"

I'd rather think that the album encloses six tracks only because that's where the cardinal part of Demonoir is and it begins with Ravn heaving a portending sigh before "Atomic Chapel" blasts off: trenchant and significantly fast riffs plodding along with Frost's staunch drumming with Olav's usual combination between hostile, throaty and uproarious rasp in one hand and storytelling rustles in the other before the whole atmosphere settles on a pedestrian pace, paving the way to really out-of-place pianistic bridges to intervene, connecting Demonoir to older albums.

"Psalm 777" and "Pandemonium War Bells" are, dare I say it, the rawest and sound astonishingly similar to the early Graveland sound, something that is maintained through "The Devil of the Desert" and "Demonoir". Although, after few overhauling listens, it becomes clear that the rawness that swarms the past good deliveries from Liberation to Hellfire can be found in this album, the only difference is that with Demonoir, the rawness isn't deep-rooted and it's just a matter of time before it gets substantially evaporated.

Demonoir is clearly better than Revelations of the Black Flame and I'm sure some fans will be thrilled with this record. It's also clear that 1349 haven't found their sound of the past yet, and even though this is definitely an improvement from their previous record, it remains, nonetheless, slightly above average.
Written by Mindheist | 22.07.2011