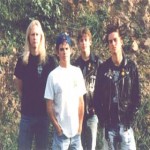 Following their initial breakup over 30 years ago and myriad reunions (including performing under the name Lowlife), L.A. crossover thrash legends Cryptic Slaughter have once again reunited, and they just completed a new album. Tentatively due for release in 2022, the follow-up to 1990's Speak Your Peace was produced and mixed by guitarist Matt Olivo and mastered by Bill Metoyer, who produced the band's first two albums Convicted (1986) and Money Talks (1987). Stay tuned for tons of new updates.

Cryptic Slaughter have scheduled upcoming performances at Northwest Terror Fest in Seattle, WA and Pitfest in The Netherlands.

The band posted the following statement via Facebook: "Having now properly acquired the trademark to their name, Cryptic Slaughter is back from the grave!"

Cryptic Slaughter is a crossover thrash supergroup comprised of founders drummer Scott Peterson, guitarist Les Evans with the addition of guitarist Matt Olivo of Repulsion, vocalist Brad Mowen best known for his work with The Accüsed and bassist Menno Verbaten of Lightning Swords Of Death/Behold! The Monolith, etc.