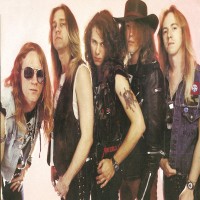 Texas-based glam hard rockers Dangerous Toys have not released a brand new studio album since 1995's The R*tist 4*merly Known as Dangerous Toys, but next year or so just might change that as guitarist Paul Lidel recently told Sleazeroxx.com that the band has begun recording a follow-up record. The band might also preview songs from the new album at their upcoming live shows.

Lidel elaborated: "I'm really excited about the new Dangerous Toys songs! I think they have the vibe of the first Dangerous Toys album, along with sort of a Van Halen meets Aerosmith, meets ZZ Top kind of thing too. Recording has begun but is going very slowly because of logistics. Everyone lives far apart. We have been playing some of the new stuff at the shows. We're playing in Atlantic City, New Jersey this weekend at the Orange Loop Festival, and I think we'll play some new stuff there."