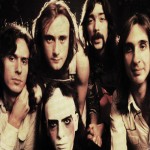 Genesis went through different line-ups with the most recognized being the formation that started in the third album with Tony Banks (organ, Mellotron, etc), Mike Rutherford (bass), Phil Collins (drums), Steve Hackett (lead guitar), and Peter Gabriel (lead vocals). With the different line-ups, different music styles were adopted, Genesis adopted in the beginning a more baroque pop/rock sound (The Beach Boys, The Beatles, The Moody Blues); in the 70's Genesis reached worldwide popularity with progressive rock direction and in the 80's mixed the progressive style with a more oriented commercially pop/rock. Genesis are recognized as one of the most influential and important rock bands of all time, being inducted into the Rock and Roll Hall of Fame in 2010. In the next group of articles, I'll review, briefly, Genesis' discography.

FGR's Artwork
From Genesis to Revelation is the debut album of Genesis. It's not an amazing album, quite far from that, but allowed the band to gain some success. The band is still in its formative years, each member was still quite young, the line-up being formed by Peter Gabriel, Anthony Phillips, Tony Banks, Mike Rutherford, John Silver, and Chris Stewart. Technically it isn't very good, in my opinion none of the members have great performances; sure it can be seen as an amazing what with the quality of Peter Gabriel and the great talent of Tony Banks but the group is still finding themselves musically, changing the musical direction of the band on the following album. Most of the tracks are based on the Bible and all the songs are sequenced together like a concept album. This is the only album in the band's discography that was baroque pop/rock style. Personally, it's the band's worst album.

This is the band's second album; Genesis adopted a more progressive approach in their music. In this album there are only six tracks and the band's compositions are way longer and more complex. Trespass wasn't a commercial success but it's one of the most respected records by the fans in the band's discography. It was the preparation for the 70's that marked the progressive era of Genesis. Every band member improves their performance; although the previous album was released only the year before, it shows that the band prepared for this change with a lot of thought, composing lengthier songs that were lyrically and technically more complex. Highlights: "The Knife", "Looking for Someone", "White Mountain".

Nursery Cryme's Artwork
This is actually the first album to feature the five piece line-up of Tony Banks, Phil Collins, Peter Gabriel, Mike Rutherford and Steve Hackett. It was the debut album of Phil Collins as drummer in Genesis and marked the beginning of a steady, cohesive line-up for the band. This album was much more the image that the band represented in the 70's, a band that composed much more complex and lengthier tracks, not only lyrically but mainly instrumentally. Let me just say that, instrumentally, this album is extraordinary as well as the rest of the band's discography in the 70's and most of the 80's. Technically each member is almost perfect and the entrance of Phil Collins on the drums put the band in a whole new level musically, and clearly brought the band a new energy. Peter Gabriel's voice "hits the perfect tune" in every song he sings. Tony Banks is "given more space" to play with his new Mellotron. Hackett's genius is shown with some amazing riffs and solos and Rutherford is the backbone of this album. Every song has a story going from suicide, to sex, to grief, even Greek mythology and other topics. Critically this isn't the band's most acclaimed record but is definitely something to listen to over and over again. Highlights: "The Musical Box", "The Return of the Giant Hogweed", "Seven Stones", "The Fountain of Salmacis".

In my view it's a continuation of the band's previous album. Foxtrot maintains both instrumentally and lyrically the same concept. The band's playing rises to the expectations and delivers a solid overall performance with great guitar, organ and drum compositions solidified by a very credible bass player. Foxtrot solidifies Genesis style of playing with two similar albums, comparatively, I prefer Nursery Cryme not only because it was something different from the band's previous albums but also because it has more outstanding tracks. One way this album is better is in the production field presenting a cleaner sound in every instrument with Hackett's guitar playing a larger role in Foxtrot. This album features one of the many epics the band presented throughout their career, "Supper's Ready" the 23-minute-long track. Highlights: "Supper's Ready", "Watcher of the Skies", "Get 'Em Out by Friday".

This is the band's fifth studio album and the first major breakthrough commercially, receiving enormous critical acclaim by most fans and critics. It's in my opinion the most technical album of the five released at the time. Again the band uses different techniques in guitar, organ and Mellotron and the band's overall performance is perfect. This is a progressive rock album mixed with psychedelic rock making it a bit faster and sometimes heavier than the albums previous to Selling England by the Pound. Each song has a story with different instrumental techniques making it a bit difficult to specify each track in this mini-review. Characters created by the band such as "Mick the Prick" and "Bob the Knob" created for the song "The Battle of Epping Forest"; or the man that is a groundsman but it's happy where he is, pushing a lawn mower, for example. Lyrically, it talks about emotional pain, happiness, love, contemporary England (in the 70's) or war. It's definitely a collector's item to be preserved as one of the accomplished albums in progressive rock history. Highlights: "Dancing with the Moonlit Knight", "I Know What I Like (In Your Wardrobe)", "Firth of Fifth", "The Battle of Epping Forest", "The Cinema Show".