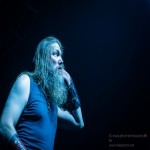 Sunday night and a chilly winter breeze saw me journeying to Ft. Lauderdale's own Revolution Live to once again don my battle armor and support The Cause. I had seen many top quality performances there in the past (Machine Head, Devin Townsend, and Septicflesh, to name a few), but this time around the great Odinists Amon Amarth were on the menu, supported by the excellent choices of fellow Scandinavians Enslaved, and U.S. retro-thrashers Skeletonwitch.

After an almost unbearably long wait in the line, the metal bulls were finally let loose, and like a seasoned professional I carefully shoved my way into the pit area at the center of the venue and grounded myself firmly near the front of the stage. The place was pretty packed for a Sunday night, with a good audience turnout that I immediately knew was going to make for a great show. Before the mayhem started, a promoter took to the stage to toss out some plastic cups into the audience that had tickets to future shows at Revolution in them, one of which I actually caught for an Iced Earth gig later in April (score!). With the lights then beginning to dim, I took a few swigs from my flask and let the rituals commence.

I had seen Skeletonwitch several times before in support of other bands, and they had always delivered strong sets of fun violent thrash inductive of large amounts of moshing and headbanging. This time around was certainly no exception.

The Ohio guys kicked off with "This Horrifying Force (The Desire To Kill)," and the chaos erupted like a volcano. The pit opened up and raged throughout the band's entire set, there was plenty of crowd surfing, and the usual cases of security people having to yell at audience members for flying flags and blocking the view of the stage. Chance Garnette belted out his trademark high energy shrieks in full force, with Nate and Scott carving riffs alongside and Evan and Dustin holding down and steadily pulsating rhythm throughout. Most of the songs in the set were taken from the two most recent albums (Serpents Unleashed and Forever Abomination), but later in Skeletonwitch also threw out some of their older material, such as "Crushed Beyond Dust" and "Beyond The Permafrost." They closed out with the near decade old "Within My Blood," to much sing along from the crowd, and Chance bid us farewell with his trademark reminder to "drink beer, smoke weed, and eat some fucking pussy!" 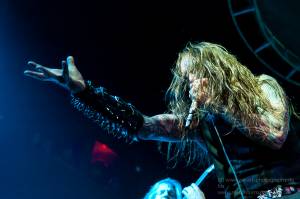 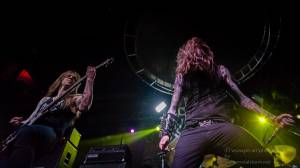 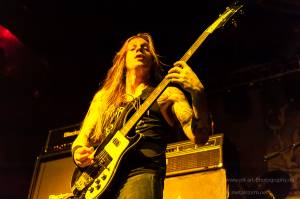 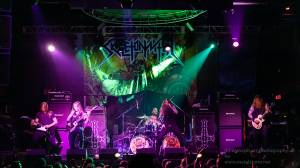 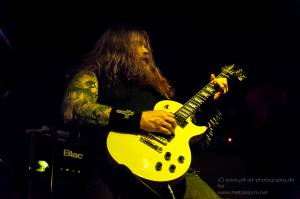 
Then came the band I was most excited to see, Enslaved. I had never imagined they ever would've come to Florida, and always figured that if they did, it would be in support of another band. I was curious to see how the audience would react to the contrast of sound: from an aggressive blackened thrash band to some more mellow, progressive-tinged black metal. The lights again began to dim, the sweat and testosterone from earlier subsided, and a new mood took over.

To put it simply, Enslaved are pretty phenomenal live. Ivar, Grutle and company started off with the recent "Death In The Eyes Of Dawn," from their latest RIITIIR album, and the atmosphere was set immediately. A mesmerizing prog vibe coupled with some extreme vocals and smooth riffs had the audience hypnotized throughout. The headbanging and moshing pretty much died down, although the pit (and even some crowd surfing!) did start going again when the band fired up the classic "Allfáðr Oðinn," from their 1993 Hordanes Land EP. I have to say, the one member who was probably the most fun to watch throughout their entire set was Herbrand Larsen. He may not have been front and center, but the keyboardist was still there off to the right of the stage, carefully adding in a layer of sound effects and delivering the clean vocals during Enslaved's more melodic passages. After ending with the epic "Isa," the band members all got together and bowed several times before departing, with thunderous applause from the crowd. 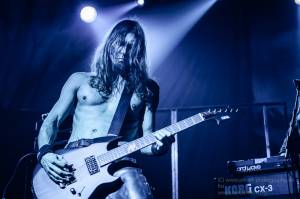 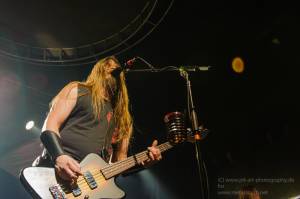 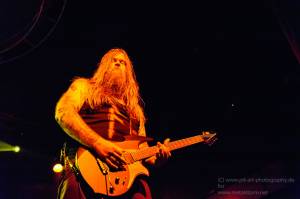 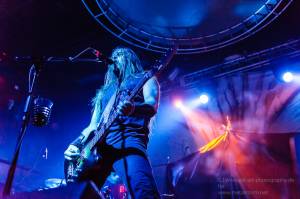 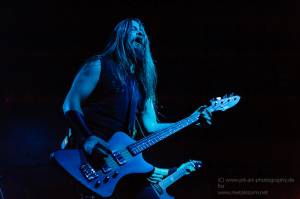 
Now it was time for the main course of the evening, the Viking warlords themselves, Amon Amarth. I had heard many things about their live performances, both good and bad, but it's pretty safe to say that these Swedes totally brought the party for this performance, and left an excellent first impression on me.

I don't know if some people were just hanging outside Revolution until they went on or what, but the crowd size for Amon Amarth saw a drastic increase. The pit had been more or less navigable for the previous two bands, but now it was packed to the brim with people, to the point of being so tight that you could barely move your arms. With Johan Hegg at the helm, the band began their slaughter with "Father Of The Wolf" from last year's Deceiver Of The Gods, and then gradually eased their way into some older, more familiar territory with stuff like "Guardians Of Asgaard" and "Cry Of The Blackbirds." 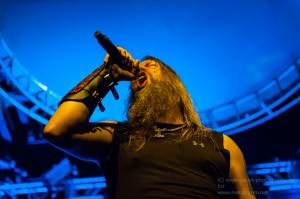 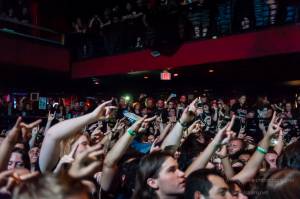 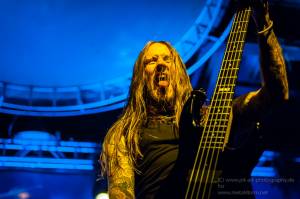 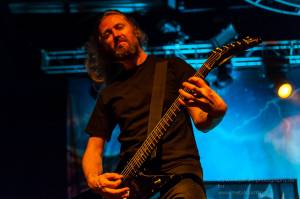 Expectedly, the energy level was sky high, and there was a huge degree of crowd enthusiasm for these guys: tons of singing along, clapping, and chanting to choruses, with Johan throwing the mic out to us on a good number of occasions. I had had people tell me the band used a lot of stage props live, in particular a giant Viking ship. The theatricality unfortunately wasn't at that level, but there was still a very fun aesthetic to the entire set, in particular Johan's brief rushes backstage to fill his horn with beer before coming back out to salute us before downing it. Amon Amarth had seemingly finished with "War Of The Gods," but after much crowd persistence, came back for the encores of "Twilight Of The Gods" and "The Pursuit Of Vikings." For the latter, the band extended the chorus for an extra minute or two, with Johan abandoning vocal duty for a moment and having us all chant it repeatedly ourselves before moving on to a climactic finish and lengthy cheering from the audience. If these guys didn't wear everyone out that night, I don't know what did. 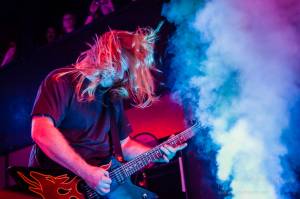 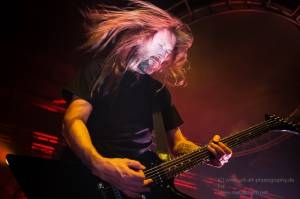 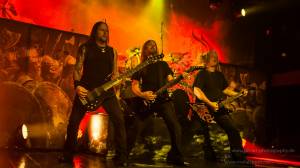 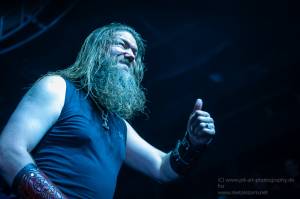 
All in all, this was one of the best shows I've been to in quite a while. It should really be noted that part of what made it so excellent was the diversity of the bands. There were only three, but between blackened thrash, progressive black, and melodic death metal the evening was chalk full of a wide array of emotions and audience reactions, and it was a far cry from all the local shows with one cookie cutter thrash band after another that plague South Florida. If this tour happens to be stopping in any city you live in or close to, I don't care what you have to do. Skip school, call in some bullshit excuse to your employer, hire a babysitter, whatever. Just get your asses to it!

Written on 30.01.2014 by
Apothecary
Comforting the disturbed and disturbing the comfortable since 2013.
More articles by Apothecary ››