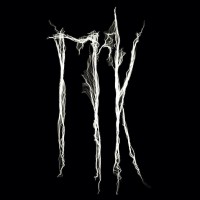 Black metal was always the one subgenre of metal that was more prone to have its purveyors be parts of scenes or collectives. It all started with a bunch of teenagers in Norway who really liked Venom, Sodom and Bathory. Collectives, labels and regional scenes have always brought fascination towards the black metal listener, hence why the only label/collective specific articles we've had were in the same black metal space (even though they may also have to do with the fact that they were written by the same person). Pure and simple: it's kvlt. And what is more kvlt than a collective of cosmic black metal entities of whereabouts and lineups unknown?

I first got to know the Prava Collective (or Права Коллектив, as it goes in Cyrillic) in 2018, when I was so taken aback by their sound that I reviewed both of the releases the collective had that year, and both of them were actually nominated in the black metal category of that year's Metal Storm Awards. Not to much success, but a worthy deed nonetheless. In the meantime Fallen Empire Records became defunct, and the collective became much more closely associated with Amor Fati Productions and Mystískaos, all the while the collective would expand to three entities and all of them have been releasing more material since my initial contact, but none that really captured my attention to the same degree. 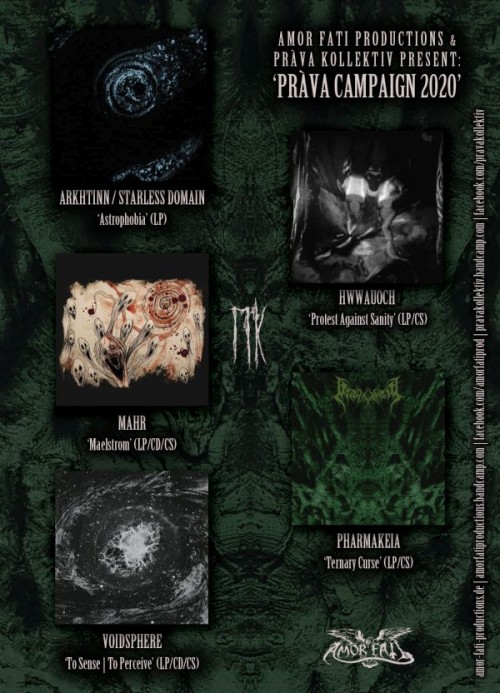 And then, November 18th happened. While everyone else was too busy waiting for the weekly release batches that come every Friday, the Prava Collective dropped a batch of one release from each of its entities, completely overshadowing whatever else would've been the hot topic of said day. Arkhtinn, Hwwauoch, Mahr, Pharmakeia, and Voidsphere merged the forces of the waves their music produced. Such a massive day for cosmic black metal could've lead to either me picking one of these and reviewing it, picking all of them and reviewing them, but eventually help was offered and enlisted from two of my fellow black metal aficionados, to present them in article form for your enjoyment. Forgive us for struggling to rate them anything other than "3,5 / 5" and "4 / 5", but they're that good.

Out of all the entities inside the Prava Collective, Arkhtinn is the oldest. Having came out with their first demo in 2013, and then resuming activity in 2016, their releases followed a set pattern of having two very long tracks, the first of which would be black metal and the latter ambient. It seems like for Astrophobia that pattern is broken by having this release be a split, and therefore making this the only entry in this article to have a song made by an entity outside the collective, in this case by American trio Starless Domain, whose equally Darkspace-influenced sound does fit alongside the collective's core sound pretty neatly.

The Arkhtinn song is fairly in line with their previous release openers, with "Astrofobi" being among the most melodic songs covered in this article. That is mostly due to the electronic synth melodies that permeate the cold and droning black metal and the unhinged vocals. But the synths and the vocals do offer a nice contrast to the repetitive nature of the rhythm section, as well as an extra layer of ambiance. The Starless Domain hits a lot of the same repetitive cold and atmospheric targets, but by comparison to the Arkhtinn side and to the rest of the music covered here, feels a bit lackluster, partly because of the irritating repeated use of the same sampled scream.

"Destroying all remaining perceptions of sanity"

From the most depraved and wretched end of the black metal spectrum comes an unhinged astral trip by the name of Hwwauoch, whose third vile concoction in as many years has helped reinvigorate the scene's seemingly forgotten chaotic evil origins. This cacophonous psychedelic mixture and manic performance style outright opposes any semblance of conventional structure while placing an emphasis on crafting the most disturbing listening experience possible, courtesy of tortured wails puncturing through the murky depths of insanity. The hammering echo of the bombastic and frenetic drums further serves to undermine whatever notion of tranquility existed prior to exposing oneself to this assault on the senses, in case you were hoping for some aspect of leniency.

Protest Against Sanity is the culmination of an unchecked psychosis allowed to experiment within the debilitating, nightmarish recording studio of its own self-sabotaging madness, blurring the lines of trauma and normalcy with a ferocity that would tear the fabric of spacetime apart. It rages and howls and yearns to be released from its bondage, attempting to lure in unsuspecting passersby with hints of melody and a playfulness that promises to take you on voyages through the vast expanse of the cosmos, but what lies beneath is so deeply twisted and violent, not even the most innocent among us would fall victim to its sinister charm. Unless...?

Lo-fi black metal has dealt with its fair share of tropes, namely of the bedroom/basement variety, but the negative connotations therein implied a lack of professionalism, vapid songwriting, and try-hard elitism that became the central focus of the band rather than the actual music -- typically because the cheap quality and gimmicky approach overwhelmed any potential for positive discussion. As time progressed, however, the underground evolved, and those lo-fi projects have taken influence from some legitimate heavyweight purveyors of extremity to carve their own niche in the big black metal history book.

For Mahr, that niche is expressed through the aptly named Maelstrom, a sonic foray into the rapid deterioration of your surroundings. Conjuring a substantial swirling dissonance and frenetic energy to pummel the listener with unrelenting waves of cataclysmic force, this deceptively multi-layered experience (courtesy of some surprisingly thick bass lines) walks you through an apocalyptic scene where bodies and buildings alike are being torn apart at their core with the world awash in blood and hellfire. Emotionally detached from the wanton death and destruction it reaps, the storm simply rages as it's meant to, because that's what it does. And this portion of the of the Prava Kollektiv capture it in all its glory.

Troy rates this one 3,5 / 5 Galveston Hurricanes.

"A guide to the crooked poison path."

Being the most recent outfit to adhere to the Prava Collective, having released their self-titled debut last year, Pharmakeia is perhaps somewhat of an odd one out. Both of the records establish Pharmakeia as demented and unforgiving, but compared to their brethren in the collective, they feel least space-like and most straight-forward. Naturally when I say that, one shouldn't expect this to sound anything close to the usual idea of black metal, just one where the riffs are more muscular, the vocals less obscured, but in spirit, it is still cold and alienating, but in a more direct way.

I am not sure what the three parts of said "ternary curse" would be, nor can I make sense of the track titles that remind me either of the vowel exercises we did in kindergarden or a datasheet detailing how many inputs and outputs a device has. But I can definitely resonate with the "cursed" feeling this album has, especially in regards to the vocals. As much as I called them less obscured, they are perhaps the least human-like as well, feeling like they are trapped and processed against their will, which might explain why this is so emotionally angry and hellbent on vengeance. The dissonance does increase the suffocating claustrophobic factor, but only as much as to not take away from just how bitter and exacerbated Ternary Curse feels.

Radu gives this one 4 / 5 Disturbed Graves


Voidsphere - To Sense / To Perceive

Of all the Prava Kollektiv bands, the one that mostly resonates with me personally is Voidsphere, whom I discovered in 2018 with To Await / To Expect. Since their 2017 debut, entitled To Call / To Speak, this band visits the Earth every year to drop an album to unsuspecting terrestrial beings, and each album is a sonic representation of what the void is up to at a certain point in time. As pretentious as it may sound, their music depicts exactly what I imagine the void to be; cold, vast, devouring, desolate, haunting and dark. But also very beautiful at times. Voidsphere follow a certain pattern with all their full-length releases featuring two songs that clock in at around 21 minutes each, bearing titles referring to what the void does. In this instance, the void senses and perceives.

The lo-fi production helps build a wall of sound, whose bricks and mortar are blistering tremolo picking, tortured screams heard in the distance, skull-ploughing drums, and, most importantly, synth lines that run seemingly straight through the cosmos. The music is atmospheric and hypnotic to the point that you can put on your headphones and gradually everything else will be shut out as if you are wearing an astronaut's helmet. The comparisons with Darkspace are inevitable but, in my opinion, Voidsphere make more interesting and diverse music. Sure, the riffs are mostly droning, but there are instances when they turn into pretty headbangable chugs (!) or dissonant meteorites floating in space, and there are also melodic yet murky bridges made of stardust that you can stand on and gaze at the infinite and entrancing blackness around you. It is like experiencing the beginning and/or the end of existence at the same time.

Nik gives this one 4 / 5 Wormholes

We finish our trip aboard the Nostromo through vastness of space here. The cargo and the ship may be destroyed, but we will reach the frontier in about six weeks, and with a little luck, the network will pick us up.