After a tough day at work and a terrible journey through the underground of Paris, I finally reached the Hard Rock Café, a classy bar where Helloween was holding a listening session of their new album, Gambling With The Devil, followed with a press conference.

Unfortunately, I was a bit late so I missed the intro track and perhaps one more song. Too bad, knowing that this intro track features Biff Byford from Saxon, doing the narration work. As Sascha Gerstner and Michael Weikath explained during the conference, Biff was chosen for many reasons: first, the narrator they used to work with on The Legacy is suffering from cancer, therefore they didn't want to bother him with that and chose someone else to do the job. Then, Biff had already worked with Freedom Call (Sascha's former band) and with Charlie Bauerfeind (Helloween's beloved producer, who both Sascha and Weiki praised during the conference) so he was probably the best choice they could make.

When I entered the room, what I could hear was fast and solid power metal. Quite linear but powerful enough to have me pound the ground with my feet. This I kept doing during the following tracks, even though I must admit it's not really the Helloween I prefer, since I enjoy more varied tracks like "Keeper Of The Seven Keys" or "The King For A 1000 Years". Yet, those first songs of Gambling With The Devil are quite good, thanks to the punchy and loud sound resulting of Charlie being the great producer he is on one hand, and to the powerful drumming of Dani Löble, the newest member of the band, on the other hand. His performance on the new record is great, and confirms what I felt twice during their last tour: Dani is perfectly suited for the job.

Then came a series of "not-so-fast-yet-still-heavy" songs, introducing more variety to the music. I particularly liked what must be something like the 7th song of the album, with some quiet piano notes at the very beginning, closely followed by a clean guitar passage leading to some more electric riffs, intensifying with time.
I also need to tell that the same kind of piano notes, setting a dark and mysterious atmosphere, are used on a few songs all along the album, especially on intros. Also, keyboards are used to give more power and majesty to the main chords played by the guitars. They give a sort of "grandiose" touch to the whole thing.
As for the vocals, it's typical Andi Deris singing style. Quite monotonous and predictable. While he may seem to sing with a heavier voice during the verses, the flow is often similar from one song to another. The choruses are softer, I mean less words, each lasting longer as if the choruses were "flying" over the music, you know.
Speaking of length, all songs on the album are quite long - at least there's no short one (expect, perhaps, the intro I couldn't listen to).

The last tracks are getting faster again. One of them is called "Can Do It" and is the "happy" song of the album, or should I say the "positive" song, as Weiki told us. He went on saying that another song that he thought was almost too positive was left out. But even "Can Do It" didn't sound as funny or positive as the usual funny or positive Helloween songs, at least not on the first listening of the album. 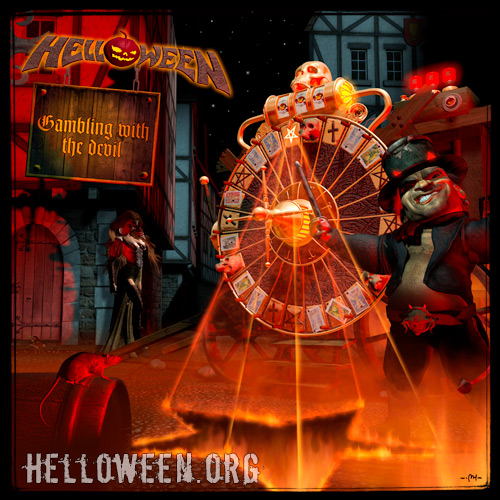 Gambling With The Devil

After the listening was over, Sascha and Weiki (the two guitarists of the band) entered and sat in front of the journalists (who were suddenly as quiet as I was throughout the evening - I must say the listening part was not exactly pleasant due to most of the people in the room chatting with each other, sometimes quite loudly), waiting for questions. I already gave you a few bits in the above paragraph, so now I'll go on and list some other important facts that have risen during this conference. I know... You probably expected a full transcription of the event, but my poor recorder did what it is the best at: recording poorly. Let's proceed.

They agreed that Gambling With The Devil was not another Keeper album, and was actually different from its acclaimed predecessor The Legacy. In fact, they wanted to keep the quality of the latter and do something new, something modern yet still bearing the Helloween trademarks. Above all, they didn't want to repeat themselves. On whether they succeeded or not, I must say I'm not sure what the answer is. Let's say it doesn't sound totally new or modern or extremely Helloweenesque, but it's quite new, modern and Helloweenesque for sure. Although I heartily agree with them saying that the album's got some "heavy riffing guitars and powerful drumming".
Weikath reacted to Sascha's heavy riffing guitars statement by agreeing, and added that it was much better than, say, the riffs on "The Dark Ride" album, which contained "riffs like 15 years old can play." Weikath did somewhat mock "The Dark Ride" on many occasions that evening, but in the end, he said he had nothing against it now, as it's been a long time since it was released.

Back to the new album. It was composed with no prior rehearsals. The guitars were recorded in Germany and part of the album was composed over the Internet, with everyone exchanging riffs and opinions over FTPs and other such software.
They knew they would have little free time after the tour, as their new management (mentioned many times by Michael Weikath) wanted to take advantage of the momentum that The Legacy gave to the band. But even so, they had to leave a lot of material out of the new album, though they will eventually use everything in the form of B sides, bonuses or whatever even though nothing is planned so far. The tracks featured on the actual album have been chosen because they fitted the whole record, and it's true to me that there's no song that sounded out of place to me while listening to it. This is the result of Charlie's selection, which everyone else including the band and the new management agreed on.
Still about the new album, Sascha told us the title was found on an evening with Andi Deris, during the last tour. Basically, they ended up saying "let's make something with 'gambling'." After all, everything in life is like gambling with the devil, the guitarists explained. Come to think about it: would you do this or that, take that risk or not, etc. Every choice we make is like gambling with the devil somehow.
As for "gambling" with Kai Hansen on the next tour, Weikath basically said there was nothing wrong with Kai despite what the media once implied. They just want the fans to be happy with the music during the tour, just like everyone else wants.

Now, to finish, I'll sum up the answers to the other questions that weren't related to the new album. On why they didn't play anything from the album Better Than Raw during the last tour, they replied that a choice has to be made and basically, their setlists reflect what they want to play. Yet they rarely change setlists during the same tour because you get used to it and it may be very handy to more or less know what you're going to play in advance so you can spare yourself some troubles.
They added that sometimes it may happen that the setlist changes in order to improve it. Also, they may have to ease the job of some other members. For instance, you can't expect Andi Deris to sing all the high singing songs of the Helloween repertoire. A singer sometimes needs to take it easy with his/her voice, especially when canceling shows costs as much as it really costs. That's also a reason to why Andi is not taking part to many conferences like that one. He's got to relax and avoid getting ill.

We also learnt that "How Many Tears", the classic Helloween song from the first album Walls Of Jericho (1985), was first composed for a school band in which Michael Weikath was doing the management work before he started composing. And he composed a piano version of what would end up being the "How Many Tears" we know. This version didn't fit the Helloween sound, so it needed to be pumped up. Also, Weikath said the original lyrics were kinda crappy... he was only 18 or 19 years old at the time.

Finally, we got to hear what bands Sascha and Weiki are currently listening to. Sascha started by saying that they were all open-minded and not evil all the time, and that they listened to various stuff. He, for instance, is liking "The Used", "Tori Amos" and many other artists. Weikath said something about bands from the 70s before he cited "Muse": "Too much noise live but they're great." Earlier, he also used this band to explain that he approves legal downloading of music: cause - still referring to what he said - even though a band like Helloween could maybe survive (illegal downloads), it may not be the case with other young bands, who knows, perhaps a new Queen, etc. Then he said something like "imagine if it happened to Muse?"

In the end, Gambling With The Devil may not be the best Helloween album to date, though it is good power metal. Those who never liked Helloween with Deris will not like it but the others will enjoy it - not as a new masterpiece but as a solid album. Also, it feels like this album can boost the overall performance of the band on stage, and if you saw them touring for The Legacy, you know they're already quite good live.
The album should be available by Halloween (October 29th).

Thanks to Jeff, Roger Wessier and Replica Records