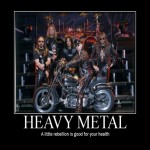 Although, I've only been really listening to rock and metal music for a few years, I have been deeply interested in the power and sacredness that is heavy metal. Heavy metal is perhaps the most purest and authentic form of music ever. Metal is not something filled with noise, shouting and smashing and blaring of instruments, it is a strong form of music filled with skill, passion, power, and being just hella-fuckin'-balls-to-the-wall-bad-ass.

Anyways, the point of this note is for me to both test my own knowledge, and yours, as well as teach those willing to learn, or just like reading things. This is not a fully accurate guide, I'll admit, as I'm really a newbie to the scene.

Heavy Metal
Although, you could call early metal bands "heavy metal" as well, later bands really put the "heavy" into heavy metal. They drew away from the blues influences and added more aggression and energy into the music, inspired by punk rock. Many of these bands were from Britain, forming the New Wave of British Heavy metal. Although some bands of this style were either before the scene started, or not from Britain.
Examples: Judas Priest, Iron Madien, Motorhead, Manowar, Mercyful Fate, Diamond Head, Girlschool, Saxon, Black Label Society, Aria, Black Tide

Speed Metal
Speed metal set the basis for the well-known thrash and power metal genres. Speed metal bands, obviously put an emphasis on speed with their styles of heavy metal. Typically speed metal was influenced by old-skool punk bands (since at the time old-skool punk was the only kind of punk). So this is when we got more double kick pedals on the bass drums, and fast playing of the guitars.
Examples: Motörhead, Accept, Judas Priest, Running Wild, Helloween, Venom, Amebix

Glam Metal
Also known as "hair metal." This well known style started with popularity of glam rock. Bands in the glam metal scene took influences from pop music, yet still remained a hard rock/heavy metal feel to it. This was the first sign of "false metal" and "posers," yet several of the bands were accepted as metal. Arguably glam metal was more of a scene, rather than a genre.
Examples: Mötely Crüe, Twisted Sister, Ratt, Warrant, WASP

Thrash Metal
When glam-metal was becoming overly popular, a lot of bands got pissed-the-fuck-off, and made music. The result was thrash metal. If speed metal is metal on speed, then thrash metal is metal on steroids. It's heavier and angrier, then its older counterpart.
Examples: Metallica, Anthrax, Slayer, Megadeath, Sepultura, Testament, Dark Angel, Gwar

Black Metal
Metal wasn't angry enough for some Satanists, so they formed black metal. They upped the distortion, and did even tremolo-picking and double kicking on the bass drums, then which is featured in thrash. Black metal also has their songs put together in a weird way, just listen to it and you will see. Vocals are typically very high pitched and raspy yet may also be grunty and growly or even operatic. Black metal guys also wore lots of creepy make-up and black spikes and stuff, like the guys from KISS, but even scarier.
Examples: Venom, Bathory, Mayhem, Samael, Behemoth, Gorgoroth, Satyricon

Death Metal
Writing songs about death, murder, gore and even vikings. Guitars, drums and bass are heavy and usually fast as fuck but can be slower at times. This was also where we got our first good listen of the (in)famous death-growl, sounding like a combination between the Cookie Monsters, Dr. Claw from Inspector Gadget and Satan himself. Not for the timid.
Examples: Death, Cannibal Corpse, Behemoth, Debauchery, Morbid Angel

Gothenburg Metal
Later death metal bands from Gothenburg formed a popular sub-genre called "Melodic death metal" or "Gothenburg metal." Not all bands who play this style are from Gothenburg, obviously, but this is where the genre was formed. It's pretty much death metal but with melody. Some metalheads don't consider this real death metal as it does sound much different from it at times.
Examples: In Flames, Amon Amarth, Arch Enemy, Eluveitie

Doom Metal
I guess a lot of people got bored with metal being so damned fast and complex. They started longing for the old days of Black Sabbath. Doom metal emphasizes slowness and a very mournful and dark atmosphere. Doom metal can either be really sad, epic or all stoner-ish like Black Sabbath. Pretty much take a Black Sabbath song, keep the slow speed of it but make it way heavier and you got doom metal.
Examples: Candlemass, The Sword, The Melvins, Paradise Lost, My Dying Bride

Drone Metal
To be honest, I don't know much about this since I've never listened to it to much. Pretty much it's like doom metal, but even slower, notes and riffs can last for a very long time. For the fans of minimalism, or people who are really stoned.
Examples: Earth, Sun O))), The Melvins, Boris

Sludge Metal
Sludge metal emerged with grunge, I believe. Sludge metal combines the slowness of doom metal with the high speed intensity of hardcore punk. I know what you're saying "What the fuck? How the hell does that work?" Trust me it does, it results in some very trippy ass shit. You could have fast guitars and slow drums or vise versa, or maybe at one point it's all slow-as-fuck and then it'll go all crazy fast.
Examples: The Melvins, Eyehategod, Mastodon, Corrosion Of Conformity, Breaking Wheel

Gothic Metal
Combine the heaviness of metal and the darkness of doom metal and gothic rock which features a lot of dark atmospheres and spooky keyboards and shit like that. Mostly very dark sounding, but it can also sound a little pop-ish at times, but at other times it can be rather aggressive even.
Examples: Paradise Lost, Lacuna Coil, Type O Negative, Farmer Boys

Symphonic Metal
Similar to gothic metal, yet less dark and well, more symphonic. It combines other styles of metal, typically goth, power or thrash with symphonic and orchestral music. Again, it can range from poppy to aggressive.
Examples: Nightwish, Within Temptation, Apocalyptica, Hevein, X-Japan

Folk Metal
Another interesting fusion genre. Combines heavy metal music with folk and this can be any genre of either. Traditional folk with power metal or Celtic folk with death metal. The possibilities are endless. The result can sound absolutely amazing. The bands may even have traditional folk instruments alongside the typical metal ones. Vocals can even be in the style of traditional folk music.
Examples: Skyclad, Folkearth, Eluveitie, Nightwish, Ensiferum

Groove Metal
No, this is not a hippy kind of metal, this is actually a form spun off of thrash metal. It is very brutal and aggressive, arguably more so than most thrash metal, yet it is not as fast paced, more repetitive and less technical. It focuses on groove, hence the title of the genre. It typically takes more influence from hardcore punk and gets a lot of the heaviness from it. Some metalheads don't consider it true metal, but it's generally regarded as such by the larger majority of metal heads.
Examples: Pantera, Sepultura, Soulfly, Lamb of God, Machine Head, Throwdown, White Zombie, Farmer Boys

Grindcore
Although it doesn't have "metal" in the name, grindcore is often considered part of extreme heavy metal. Grindcore bands combine death metal with industrial music, hardcore and noise rock. The result is of course very noisy to most people. This genre is often confused with death metal, though it sounds very different to the trained ear. Not all bands of this genre are considered "true metal," unless they focus on more death metal elements, as this genre does have a lot of influence outside of metal. Personally, I don't really enjoy grindcore in a musical sense, but the concept of just making the most crazy-fast and noisy kind of music (while still actually being music) does amuse me to an extent.
Examples: Napalm Death, Carcass, Anal Cunt, Extreme Noise Terror, Abnormality

WARNING: The following genres may not be considered actual metal genres by some metalheads. That is, if the only metal bands you listen to mainly fall under the genres listed below, you might be called a "poser." But there are plenty of more open-minded people out there, too.

Alternative Metal
With the rise of alternative rock, alternative metal came along with it. Some were impressive, but many were rejected as true metal. The style has a lot of unusual characteristics, such as odd time signatures, various influences outside of metal or rock music and vocal/lyric styles not typical in metal. Some alternative metal bands are closely associated with grunge music and the grunge scene.
Examples: Faith No More, System Of A Down, Disturbed, Tool, Godsmack, Alice In Chains, Soundgarden, Drowning Pool, Evanescence, In Flames 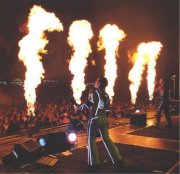 Funk Metal
Another alt-metal spin-off. This one takes influence from funk music. Funky eh? Har-har-har. I don't listen to much of it, but it's kinda cool actually.
Examples: Faith No More, Primus, Rage Against The Machine, Incubus, Extreme

Rap Metal
A lot like funk metal, but this one takes influences from hip-hop. Guess the kind of vocal style.
Examples: Rage Against the Machine, Clawfinger, Limp Bizkit, Hollywood Undead

Metalcore
Pretty much here's how metalcore started: a bunch of emo kids got bullied in high school and as a result they got angry and started bands; it resulted in metalcore. It's heavy, yeah, but it gets its heaviness from modern hardcore and NOT metal. The vocals are typically a mixture of quazi-death growls, and soft whiny voiced singing. Metalcore also spawned deathcore, which allowed bands to sneak further into the extreme metal scene by adding more death metal influence. You can probably tell I'm not too fond of this genre for the most part, but the odd band is okay. I just find it very over-rated, considering how popular it is.
Examples: All That Remains, God Forbid, Throwdown, Killswitch Engage, Bullet For My Valentine, The Black Dahlia Murder, Avenged Sevenfold, Job For A Cowboy

Nu Metal
Combine every genre below my warning and you get this. Some of it I like, most of it I hate. The true metal heads despise this and reject it as anything metal. This style of music was very popular in the 90s and as a result it's what got a lot of people my age in to metal, when they expressed more interest. Personally, I'm both a defender and an enemy of this genre. On one hand, I praise it for introducing me into heavy metal, and on the other hand I loath it for marring its name as well. A lot of nu-metal bands do reject the title and don't even call themselves metal at all, while others pose as metal and act like they're the heaviest shit, when they are far from it. But hey, to each their own.
Examples: Korn, Disturbed, Mushroomhead, Slipknot, Mudvayne, Dope, Kitty

Anyways, that concludes my (not-so) little guide the basic metal genres. There's even more, but I don't feel like getting into them, most of them are sub-sub-genres of the ones I already mentioned. So I hope this either helped, or was at least entertaining. If you wanna point out any mistakes or disagree with anything feel free to maturely point it out in a comment or something.