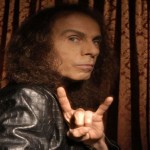 So I heard the news today, Ronnie James Dio passed away after a battle with stomach cancer. Given the news over the past 24 hours (he passed away, "i'm not dead yet!", yes he has), it's made for a tumultuous day.

Lots of folks round these parts (rightfully) take a cynical view at "RIP!" threads and comments to those saluting "heroes" they've never met.

And I really don't give a fuck about the cynics at this point.

While I never met the man, I do feel like I know him. He's had a presence in my life onwards from the mid- 80's when DIO was so big with Last In Line and Holy Diver that not only did the metal head burn-outs wear his T's at school... so did the fucking cheerleaders.

With the passing of Ronnie James Dio, not only did metal bands lose a frontman of legendary (if diminutive) stature, metal itself lost a legendary front man. It seems whenever a documentary was made on the subject, amidst footage of drunken clowns incapable of blurting out a coherent sentence whether at festivals or floating in an inner-tube, there was always Ronnie James Dio. And he could always be counted on as a coherent, charismatic, and literate performer who actually had something poignant to say.

While the other clowns gave ammo to those seeking to diminish our favorite form of music, RJD gave us the counter punch.

So take your vinyl/cassette/compact disk/mp3 version of Last In Line or Holy Diver, crank it until your whole house reverberates, grab a bottle of your favorite fire water, and hoist your fingers to the sky and lament his passing.

Thanks, Ronnie, for not only being a great front man and giving us some great tunes, thanks for being an ambassador for metal itself.

You have our gratitude.

(consider my thoughts and best wishes for the family and friends of Ronnie James Dio. I hope you can find enough joy in celebrating his accomplishments over the years to outweigh the grief and sorrow of his passing.)