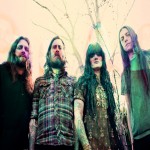 Royal Thunder, the bluesy, soulful, psychedelic sludge band (or as they sometimes call their music, "post-apocalyptic blues") is currently on tour in the USA with Pallbearer and Ancient VVisdom in support of Enslaved. Monday night they stopped for an unforgettable show at The Highline in Seattle's Capitol Hill neighborhood. I met up with guitarist/founding member Josh Weaver and new drummer Evan Diprima for an interview. We couldn't find a quiet place at the club to sit and talk so after wandering around for several minutes we just stopped and stood in the small back hallway of a neighboring business. The impromptu environment made for a very fun chat! I didn't know how much time we'd have so I got right to my most pressing question. The American state of Georgia is home to the cities of Atlanta and Savannah, both of which are famous for their top notch sludge metal?

Susan: So what is it about Georgia that produces so much good metal?

Josh: I don't know. That question comes up a lot and I honestly don't have an answer. I mean, I think that there is definitely something? it's very obvious that there are a lot of great heavier bands coming out of Atlanta but I can't even? maybe it's something in the water (laughs).

Susan: I wonder! I mean it's kind of specific; it's not like it's the power metal capitol of the US.

Josh: Yeah. There's definitely a lot of, maybe a bluesy influence from the south. Maybe that's where a lot of the sound comes from. It's interesting.

Susan: I can see that. Well, how did you guys get into playing music and what other instruments do you play?

Josh: I got into playing music years ago. I have an older brother and I always wanted to do what he was into. For Christmas one year he got a bass and I was like, "I gotta get some kind of instrument," so he went and helped me. We got to go to a music store and pick out something and I picked out a guitar. So, it kind of sat around for like a year or two and then I heard Nirvana and that was it. I said "man, I really want to play music." They really inspired me.

Evan: My mother was a piano player so I always heard her playing when I was a little kid and she always tried to get me to play some kind of instrument. First it was piano but I wasn't really into it. I mean I like it a lot but? then I thought about guitar but didn't want to do that. Drums were kind of my thing so I've stuck with that. I just played since I was about 7 years old, never really wanted to do anything else.

Susan: From what other kinds of music besides metal do you guys draw inspiration?

Josh: On tour we probably listen to so much like Type O Negative and The Cult, you know, goth rock kind of stuff.

Josh: I mean I like all kinds of music. Mainly early Zeppelin stuff, I've really gotten into as I've gotten older. It's one of those bands that when you're growing up was on every radio station so it was one of those bands I kind of ignored till, actually just a couple years back I was like man, this is awesome. Yeah, all kinds of music. If it's got a good melody I'm into it.

Evan: Yeah, basically same thing he just said. I find myself listening to a lot of stuff now that's not really that heavy anymore.

Susan: You've got to keep it well rounded.

Susan: So you mentioned Zeppelin and I'm just wondering, because I was having a conversation about this the other day with someone, do you consider them metal or just kind of a precursor to metal?

Josh: I don't. I mean think that they're a hard rock band for sure. I don't even consider Sabbath a metal band but a lot of people do. I think that definitely a lot of the riffs and some of the parts WERE a precursor to metal and without those bands there wouldn't be all those bands we have today, for sure.

Susan: We wouldn't be standing here.

Susan: So I found an interview you guys did with a couple of 11 year old girls who interview bands.

Josh: It was awesome.

Susan: They asked some really interesting questions one about what kind of super powers you would have? And you guys came up with some really weird answers which made me think: what kind of books did you read as a kid or what sci-fi were you into that inspired some of these strange answers?

Josh: I don't know man, I was just? I didn't even really read that much as a kid. But it's funny, my mom, I come from a really conservative home in the south but it's funny because I could rent like 3 horror films a week. So maybe that has something to do with it. (laughs)

Evan: I just read a bunch of fantasy books like The Hobbit, The Lord of the Rings books, I got into the Chronicles of Narnia, all that good stuff.

Susan: So, tell me about the name CVI and what the numbers stand for? (I had recently learned that their debut album title, CVI, is in fact a set of roman numerals.)

Josh: Oh, man. It's a long story. We didn't really know what to name the album and it's one of those things that, me specifically and Mel (Mlny Parsonz, bass and vocals), and really close friends of mine like, years ago, long story short we found a long series of events where we found the number 106. We found $106.. there was this poor woman that, after we found the money, we were so broke back then too, just super stoked to get something like that we started walking away and heard this lady crying and we ended up giving the money back since it was hers. And then we found a friend of ours' grandmother dead and ever since then we've just seen the number 106 everywhere. It's so crazy I can't even think of specifics right now. Then there was like a song we were trying to figure out for the album and we were trying to figure out the beat per minute I was playing. It ended up I was playing 106 beats per minute. Yeah, silly stuff like that. But it kind of made sense to name it that. You don't really know what it means but it keeps us on our toes for sure.

Susan: Well, the album turned out really well. Did it turn out the way you'd imagined it or did you have different expectations for the album?

Josh: Yeah actually it turned out more than I could ever imagine. It was so much better than I thought it would ever be. I knew it would be good but it's actually the first album that I've ever had the opportunity to record where we really did not cut any corners, like we REALLY worked at it till we got it exactly how we wanted it. I've never really had that opportunity before but yeah, super happy with it.

Susan: Good. Well you certainly have a lot of fans at Metal Storm. We're all happy with it, too! Last question, I see you have lots of tattoos; do you have a favorite?

Susan: Or something you regret?

Josh: I do have a funny one. I don't regret it at all. Where is it, let me remember (he rolls up his sleeves inspecting both arms). Oh, yeah. A friend of mine, one night we were drinking and he ended up just getting the tattoo machine out and just throwing the janky looking Royal Thunder tattoo on me.

Susan: Is that at all related to a band logo? It doesn't look familiar?

Josh: No (laughs). No, it's just literally some drinking party janky tattoo but I love it, though. It means a lot from a friend of mine. 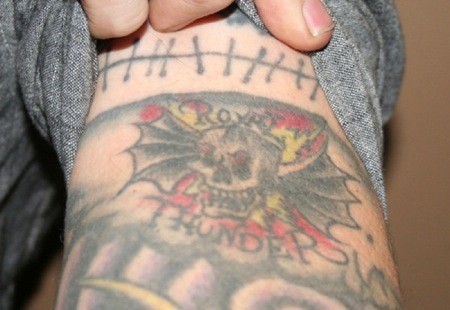 Susan: Aww. Well, any last things you want to add?

Josh: No, just super stoked to be back on the road, to be out traveling.

Susan: Is this your first time in Seattle

Josh: No we played I guess, last summer? Yeah?

Susan: Nice. Glad you're back!

Posted on 14.02.2013 by
Susan
Susan appreciates quality metal regardless of sub-genre. Metal Storm Staff since 2006.